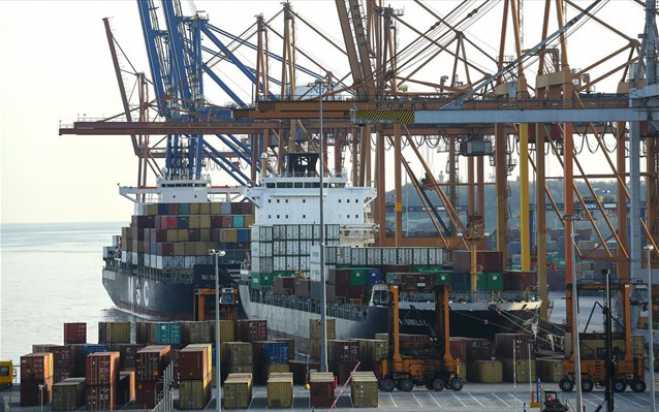 The future of Cosco's massive, by Greek standards, investment at the port of Piraeus was the focus of a high-profile and multi-party meeting on Friday at the Municipal Theater of Piraeus, between the Chinese multinational's leadership, the visiting mayor of Shanghai and the newly re-elected administration of the port city, among others.

The meeting and high-level contacts come after the Cosco-controlled Piraeus Port Authority's 600-million-euro master plan continued to face obstacles and resistance from both the central government and local entities, with opposition to the proposed building of a high-end shopping mall, luxury hotels and a new logistics hub within the port's premises. Opposition has also surfaced over Cosco's intent to upgrade and expand ship-repair services within the PPA.

In taking the lead, re-elected Piraeus Mayor Yannis Moralis said his administration wants stepped up cooperation with Cosco, but also for the port authority to deepen its ties with local society and business interests.

The Shanghai-based and state-controlled shipping and port management giant acquired a controlling stake of the Piraeus Port Authority in August 2016 after placing the highest bid in an international tender, prior to 2014. Cosco acquired a 40-year concession for the port, Greece's biggest and busiest, during the SYRIZA government's tenure, whereas the party was a vicious opponent of any privatization, when it was in the opposition.

Cosco Shipping Corp. purchased 51 percent of PPA in August 2016, with an option for another 16 percent, which it will acquire by implementing outlays foreseen in 1.5-billion-euros concession contract, which may reach two billion euros with the investments.

Moralis spoke after greeting his counterpart from the Chinese metropolis of Shanghai, Ying Yong, with other top officials at the open meeting including the PRC's ambassador to Greece, Zhang Qiyue, Cosco Shipping Group President Xu Lirong, and well-known Greek shipowner and businessman Vangelis Marinakis, the owner of the popular Olympiacos football club, a co-owner of Nottingham FC and the top-getter among municipal councilors in the recent Piraeus municipal race. Chamber presidents and numerous other officials were also on hand.

The meeting follows notification by PPA to a shipping-ministry affiliated committee tasked with port development and planning, namely that it will not submit a modified master plan, after members of the latter requested changes - a development more-or-less expected with a general election in Greece now less than a month away.

Cosco-led PPA has been in negotiations with the hard left SYRIZA government over the past two years over its ambitious master plan, with still no resolution in sight. For instance, a planned new logistics center in an area bordering on the smaller Keratsini municipality faced opposition from the outgoing transport ministry's leadership, which was actively promoting another logistics hub further to the west.