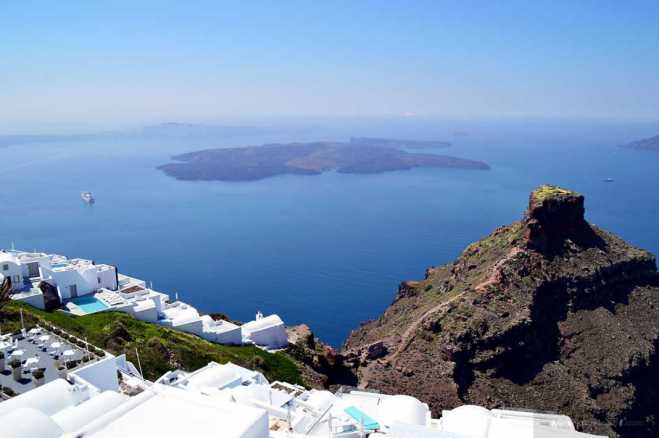 The Greek island of Santorini, one of the most popular destinations of Greece, was created following a huge natural disaster 3,600 years ago. One of the largest volcanic eruptions took place there, and among the materials spawned out were rocks similar to those of Mars.

Scientists exposed the make-up of the island. “In the Balos Cove, located to the south of the island, we have discovered basalts such as those that have been identified by the rovers on Mars and with properties similar to those of certain meteorites from the red planet and those of terrestrial rocks classified as Martian analogues,” said Ioannis Baziotis, a researcher at the Agricultural University of Athens and co-author of the study, recently published in Icarus.

“The basalts of this cove and other, similar ones that we have also found in two areas northeast of Santorini are quite abundant, so they can serve as an accessible and low-cost resource for experiments, instead of using the rare and expensive olivine-phyric shergottites collected on Earth or material laboriously prepared from synthetic mixes.”

Anezina Solomonidou, a researcher at the European Space Astronomy Centre, run by the European Space Agency (ESA) near Madrid points to the geological properties of Balos Cove. “Optical microscopy and geochemical analyses show that the basalts of Balos Cove are viable analogues for characterising geological processes and chemical and mineralogical properties of materials present on the Martian surface,” she said.

“In addition, this area of the island is easily accessible and offers excellent logistics for sampling, testing and calibration instruments, field training and other activities related to current and future Mars exploration.”

Authors state that the basaltic material is equivalent to that found by the Spirit and Curiosity rovers in the Gusev and Gale craters of mars. Its composition is similar to Martian meteorites (olivine-phyric shergottites) and much like Martian samples found at the International Space Analogue Rockstore (ISAR) where terrestrial rocks are used to test instruments that will fly on space missions.