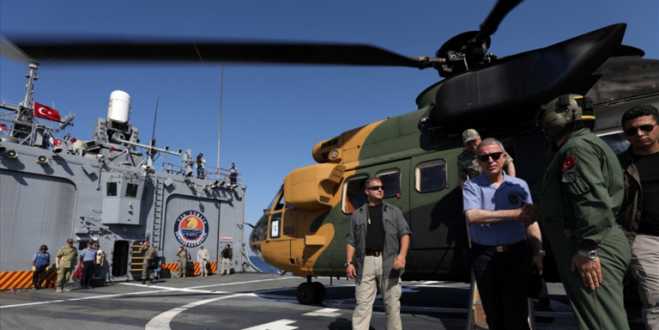 Hulusi Akar has been indulging in a barrage of inflammatory statements over the last 24 hours, making the most of his visit to the Occupied Territories. But on Sunday, Deputy Prime Minister of Turkey, Fuat Oktay sent his own threatening messages.

In addition to his meetings in the Occupied Territories and a visit to Famagusta, Hulusi Akar went by helicopter to the frigate sent by Turkey to the eastern Mediterranean to accompany the drilling rig "Yavuz". The defense minister was briefed on the activities of the Navy in the eastern Mediterranean and the Aegean and commented: "We have defended our rights, the rights of the Turkish Cypriots to the end, and we will continue to do so. We are determined. " It is recalled that Turkish Energy Minister Fatih Dönmez had visited Yavuz a few days earlier.

Speaking to the crew of the frigate, Akar once again spoke of a "blue homeland". "Here in Cyprus, in the eastern Mediterranean, in the Aegean, we will not tolerate anything. From the outset we say that there is no possibility of making decisions without our participation," the Turkish defense minister said.

"It's a joke that they expect to drill, take advantage of wealth and watch 82 million Turks do nothing. That does not exist. There are international rules, practices, methods. We are defending our rights, the rights of the Turkish Cypriots to the end. That's why no one has to test our strength,” he said, a statement he had made on the Occupied Territories a few hours ago.