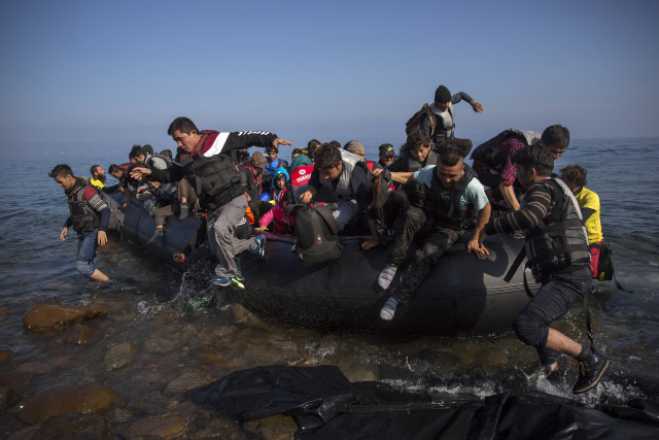 The European Commission has noted the increase in migrants arriving at the Greek islands in recent weeks and continues to support Greece financially, politically and operationally in handling migration pressures, EU Commission spokesperson Natasha Bertaud said on Monday.

"We've noted with concern the large number of arrivals reported in Lesvos over the past weeks, which is undoubtedly putting additional pressure on a system that is already under great strain, but we did underline that the arrivals over the summer remain just a fraction of what they were in the months preceding the EU-Turkey Statement; there is still a decrease of 91 pct compared to that period," Bertaud said.

"We continue to monitor very closely the arrivals in the Aegean and continue to support Greece both financially and politically and operationally," she added.

Bertaud said she was not aware of any request from the Greek side for additional Frontex forces or patrols but added that the Commission stands ready to support Greece operationally through its agencies, such as the European Asylum Office (EASO), Europol and the European border and coast guard.

Asked about a possible change in Turkey's stance on the refugee and migration issue, Bertaud repeated that European Commissioner Dimitris Avramopoulos is in constant contact, politically and technically, with both the Greek and Turkish sides and is working with Greece to improve conditions on the Greek islands.

"We stand ready to discuss additional emergency measures that have already been announced by the Greek authorities and are starting now to be put in place," she said.

She also noted that both sides remain committed to the implementation of the EU-Turkey Statement and, in response to questions, offered assurances that all contracts for financial assistance to Turkey are monitored by the Commission and arranged via international NGOs, with only in seven out of 125 cases has the Commission collaborated directly with Turkish ministries.