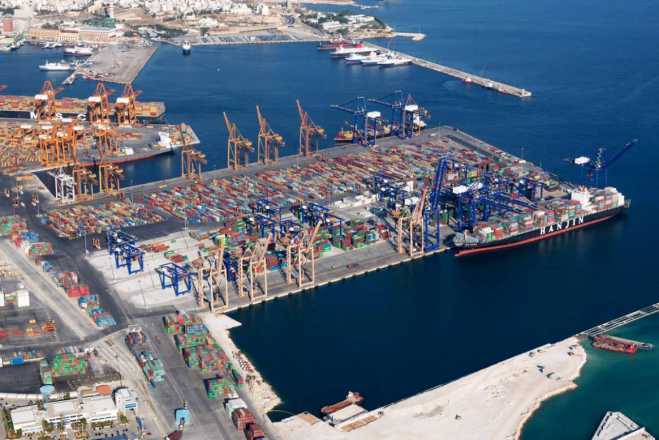 The approval process of Piraeus Port Authority (PPA) SA's investment plan-master plan is under the countdown.

Tomorrow the Minister of Maritime and Island Policy will submit the full dossier to the Ministry of the Maritime Planning and Development Committee, which will meet on the same day. The first part of the meeting can be attended by anyone interested in submitting their opinion, bodies or even natural persons in an open consultation. At noon the members of the Commission will meet and late in the evening the decision is expected to be taken within 48 hours.

It is the decision of the government and Prime Minister Kyriakos Mitsotakis personally that the works should proceed as soon as possible, even with just a single bulldozer before traveling to China and before the Chinese president pays a visit in November.

In mid-September, in a meeting of Yiannis Plakiotakis with the new President of PPA SA. - Cosco Shipping Mr YU Zenggang, the Greek Minister, had emphasized that "the Government's decision is to proceed immediately and without delay to take all necessary steps to rapidly launch major investments in the country, including Chinese investment." COSCO Group in the port of Piraeus, always in line with European and national laws.

The PPA president, for its part, assured the minister that the Chinese side is committed to launching the projects under the new master plan immediately after its approval by Port Planning and Development Committee (ESAL) and that these investments are only the beginning, as he said, COSCO's goal is to continuously grow and strengthen the port of Piraeus.

The money in any case is a lot. The EUR 700 million provided for in the revised investment plan is more than double the mandatory investment - around EUR 294 million - provided for in the PPA concession. The COSCO subsidiary has already invested around € 100m despite the inaction of government agencies in recent years.

According to the Minister of Shipping, "Implementation of the investment plan, after being reviewed by the relevant Port Planning and Development Committee (ESAL), has dramatic benefits for the port of Piraeus, as it provides for the implementation of major projects worth over € 700 million. that are changing its dynamics, making it an unquestionable protagonist in global maritime trade.

This investment is a huge bet for the country, he added, pointing out three main reasons:

-First, because the "unlocking" of the investment of PPA SA - COSCO SHIPPING in Greece, which - it should be emphasized - is done with equity, sends a powerful signal to the global economy that Greece is returning dynamically to the international economic and investment environment.

Second, because it demonstrates in the clearest way that we are committed to fighting any gray zone that calls into question the ability of Greece to cope with and absorb such large and significant international investment, and.

Third, because it is an investment that will benefit not only investors but also the Greek people.

It is recalled that PPA's new improved design includes the construction of a fourth container handling pier and a Duty Free Shops cruise service.

There is no mention of the word "shipyard" in the text, which was the point of friction and the reason for delaying the drawing of the plan. According to the same information, there is talk of developing a shipbuilding service, which is in any case within Cosco's obligations.

Port circles emphasize that now everyone expects employment growth in Piraeus, both in the field of construction projects and in the operation of the port with new investments.