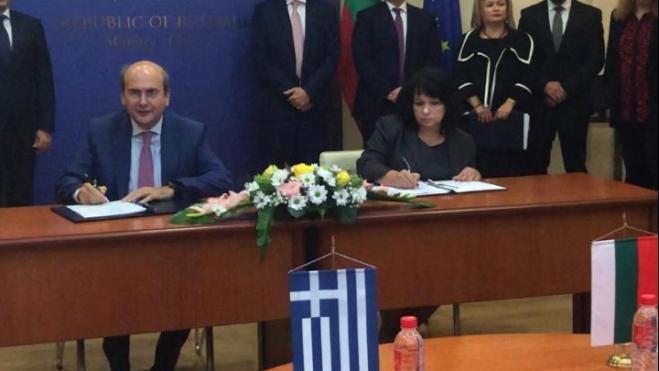 Greece and Bulgaria signed a package deal for the construction of the Gas Interconnector Greece-Bulgaria (IGB) in Sofia on Thursday, setting the project on a trajectory that will lead to its completion by July 2021.

Environment & Energy Minister Kostis Chatzidakis and his Bulgarian counterpart Temenuzhka Petkova signed the agreement on behalf of their governments.

Following the signing event, the Greek minister said he had been energy minister when he initiated the project in 2009. "It took us a decade to get to the signing, but I am happy that with my contribution during the last quarter all remaining obstacles remaining were overcome and we are now moving from theory to action. IGB expands Greece's geostrategic importance and supports energy security in the region," he said.

Bulgarian Energy Minister Petkova said that the project "is a landmark of vital importance for the country's energy strategy and the security of our natural gas supplies. The implementation of the pipeline is now non-reversible."Several other agreements were signed before the two ministers, briefly as follows:

- The revised shareholders' agreement between the state-controlled Bulgarian Energy Holding (BEH) and the Greek company IGI Poseidon, which together comprise the ICGB consortium. ICGB oversees the planning, construction and operation of IGB, each of which has a 50 pct stake. IGI Poseidon's share is equally split between its shareholders, the Public Gas Corporation of Greece (DEPA) and the Italy-based Edison- ICGB's shareholding capital expansion- The loan agreement signed with the European Investment Bank, for 110 million euros- The agreement for the transfer of gas with Bulgartransgaz, the Bulgarian gas network distributor (corresponding to Greece's DESFA)- The initial agreements for the construction of the 182-km long pipeline, budgeted at nearly 250 million euros.

In addition, the EU has approved an 84 million euro funding as part of the Projects of Common Interest initiative.

Works are expected to begin shortly and be completed within 18 months. IGB is the first section of the so-called Vertical Corridor, a natural gas transportation network that will transform Greece into Southeast Europe's energy hub.

At this point, almost the entire load of the gas IGB will transport will come from TAP (Trans Adriatic Pipeline), expected to go into operation in 2020 and transport gas from Azerbaijan fields to European markets."IGB's construction and operation acts as a significant driver to strengthen Greece's geostrategic position in southeastern Europe, while promoting the diversification of supply sources and pathways of natural gas - an EU priority - and reducing dependency on Russian natural gas exports," the Environment and Energy Ministry said in a statement. "This is especially true for Bulgaria, whose sole supplier is Russia."