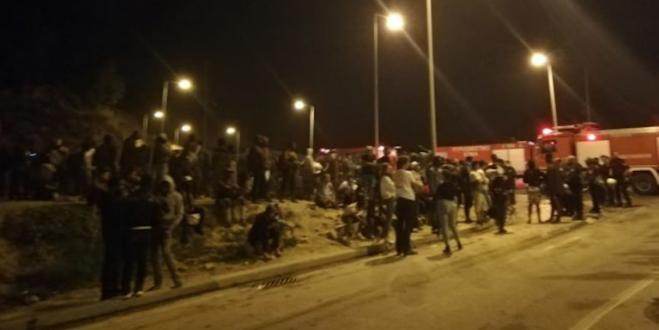 A large part of the hotspot on Samos was destroyed late Monday when a fire broke out during clashes among asylum seekers of different nationalities.

The Fire Brigade put out the fire while thousands of asylum seekers were transferred to other open-air facilities inside and outside the town.

The situation with migrants on Samos is uncontrollable as riotous incidents between Syrians and Afghans broke out during the night.

Indeed, the situation is so bleak that as stated by Samos Mayor Giorgos Stantzos today there were no schools in operation. "We were forced today to close more than ten schools - kindergartens, elementary schools, junior high schools, and high schools - that are close to the refugee reception center because we did not know what the development would be," he said.

Speaking to the Gr Times, Mr Stantzos said he convened a meeting yesterday at 1.00 pm, attended by the police chief, port officer, vice-governor of Samos, the military commander and head of the reception center, just as the events were under way. He even said that he now looks forward to the on-site visit of political leadership. The Deputy Minister of Citizen Protection Mr. Eleftherios Economou is to come. We have been in regular contact since yesterday, as with Citizen Protection Minister Chrysochoidis."

At the same time he expressed his concern “It's not possible that they stab each other in the center of Samos with open shops, among people. We were forced today to close more than ten schools - kindergartens, kindergartens, elementary schools, junior high schools, and high schools - that are close to the reception center, because we didn't know what the development would be, " Mr. Stantzos pointed out.

"Immigrants in Vathi rebelled - They were closing in on the city"
Mr Stantzos also complained that at the reception center in Vathi on Monday night there was "an uprising and the fire is part of the uprising. Many asylum seekers have found refuge here in the center of Vathi. We have 7000 permanent residents and 5700 refugees, "said Mr. Stantzos.

"Immigrants and refugees must be transferred immediately from the island to other places. I think we've surpassed the explosive threshold. There are reports that yesterday's incidents between the Syrians and Afghans has to do with the conflict over Syria's war operations. If these people are constantly out of control, I don't know how long people will keep calm. Most drink heavily and create incidents," he added.

He even said that "young immigrants attempted to get into the city with clubs and stones in their hands. The police forces repulsed them a couple of times and then they set fire. It was a piece of script that unfolded. "

"We live in an emergency situation. We demand that all this population leave the island," he said, adding that of the approximately 6,000 immigrants and refugees in Samos, 28% are Syrians, 28% Afghans and others of various nationalities.