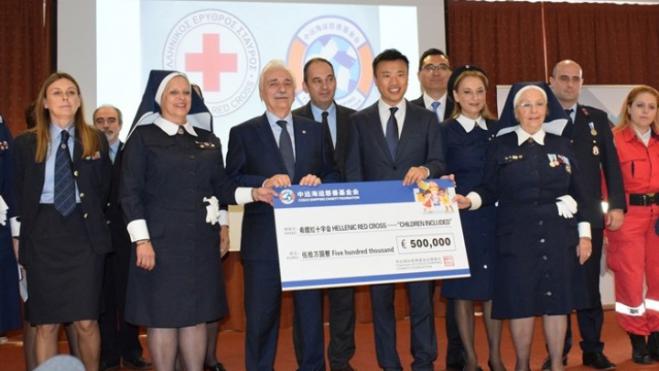 Cosco Shipping Charity Foundation donated 500,000 euros towards helping some 2,180 children facing social exclusion due to poverty, presented to the Hellenic Red Cross (HRC) at a special event held at the Piraeus Port Authority (OLP) on Thursday.

The money is earmarked for two actions: helping some 80 students in the final grade of high school prepare for university, and supporting educational, cultural, innovation and sports activities for some 2,100 junior and junior high students.

Both actions affect students in the broader Piraeus areas of Keratsini, Drapetsona, Perama and Salamina and the central Athens areas of Academia Platonos and Sepolia at Kolonos.

Plakiotakis said that Cosco's charity gesture demonstrates the Chinese group's decision to be actively involved in Greek social issues and to take actions and initiatives that although go beyond the confines of regular business, they nonetheless send an encouraging message to Greek society that the company's presence in Greece is multidimensional and multitudinous.

The Greek shipping minister emphasized how only a few days ago the Piraeus Port Authority set another record for container shipping, exceeding 5 million TEUs, proving that relations between Greece and China, especially after the Chinese president's recent Athens visit, are entering a new constructive era.