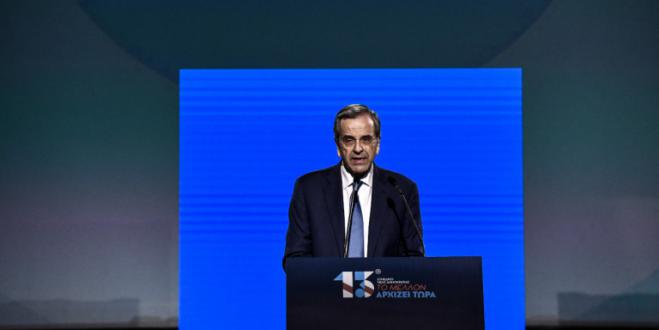 Antonis Samaras, from the step of the ND Congress, once again accused SYRIZA and the "landmines" it left for the current government, while speaking openly about "illegal immigration".

"Just a year ago I told you that Kyriakos Mitsotakis would be the next prime minister and it came true. I have told you that it is not enough to win, but we must win clearly to rule with free hands. And that's what happened,"said former prime minister Antonis Samaras, speaking at the ND congress.

“All of this happened because we all fought together. We have not solved the country's problems just because the worst government in decades has gone. SYRIZA did not leave us burnt land, but a minefield,” he added. He then referred to the government's actions so far, expressing dissatisfaction with one thing... the refugee issue.

"The government has made it perfectly clear from the outset that the overwhelming majority of those in the country are not refugees, but illegal immigrants," he said.

He then made extensive reference to the management of immigration during his premiership, stressing that we need closed centers and much faster asylum decisions, supporting the "policy announced by the new government".

The blackmail of Turkey
"Turkey acquired during SYRIZA a problem of extorting Greece that we did not have before," said Samaras, adding that "SYRIZA has opened the faucet which is now held by Turkey. Our country now has an informal illegal colonization, this has to change as soon as possible. "

"Illegal immigration threatens to destroy all European societies individually and the European Union itself is asleep," he added. Responding to the right-wing views of the ND, he stressed that "we are saying what Macron is saying, is he also right-wing and xenophobic?" adding "they did not hesitate in attacking Father Antonios [head of a children's charity]. Don't expect good words from them. "

Samaras on the Prespa Agreement

Referring to the Prespa Agreement, he said it was "an unacceptable agreement as we had warned. It seemed like we did everything correctly from the start, while Skopje promised that they would make some concessions in the future if their accession to the EU went ahead."

However, as Antonis Samaras emphasized, after the French veto of the accession negotiations "only our full concessions remained in place." "It is assumed that NATO would stabilize Skopje. Who will stabilize NATO itself?" he wondered. "The problem is how we will get out [of the agreement] without paying the costs. This is not easy," Mr. Samaras said, arguing that "for the time being we must shield Greece from the negative effects of the agreement."