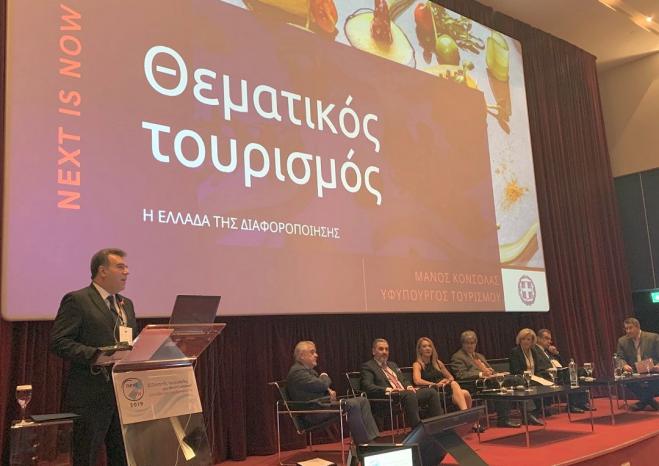 The Greek Tourism Ministry’s main goal is to break away from mass tourism and move towards a more human-centered tourism development model, Tourism Minister Harry Theoharis said on Thursday.

Speaking during the Next is Now tourism forum in Athens, Minister Theoharis said that the desired tourism model will absorb the demands of tourists visiting the country, the needs of local communities and safeguard Greece’s environment, tradition and history.

“The shift to quality, sustainable development and the creation of a product that will not exclude any tourist, such as persons with disabilities, is a difficult undertaking that requires the involvement of all parties involved,” the tourism minister said.

According to Minister Theoharis, the ministry’s aim is to plan the strategy for the next day in tourism, in cooperation with the public and private sectors.
“We need to move away from the logic of circumstantial development, but this can not happen from one day to the next… We need the political leadership, the tourist bodies, the private sector and the industry’s employees to work together to achieve this,” he said, also adding that the government will stand by all the efforts of hoteliers to meet challenges ahead.

Development through thematic forms of tourism

On his part, Greek Deputy Tourism Minister Manos Konsolas presented the ministry’s plans to develop thematic and alternative forms of tourism in Greece.

As underlined by the deputy minister, the diversification and enrichment of Greece’s tourism product is linked to the combined development of different forms of tourism, aiming to enhance the country’s competitiveness, attract high-income visitors, open to new markets and target new ones, extend the season, boost sustainable development, create new businesses and increase employment.

Moreover, he pointed out that for many years, Greece was “trapped” in promoting only the traditional form of “sun and sea” tourism.

“But increased competition and international trends now call for another perspective, and especially the development of alternative forms of tourism,” Konsolas said, referring to the ministry’s goal to promote cruise and marine tourism, health tourism, urban tourism, religious tourism and gastronomy tourism.

In addition, Konsolas announced that the bill for diving tourism is ready to be tabled in parliament.

The Next is Now forum was organized by enikonomia.gr and held under the auspices of the Tourism Ministry, the Greek National Tourism Organization (GNTO) and the Region of Attica.