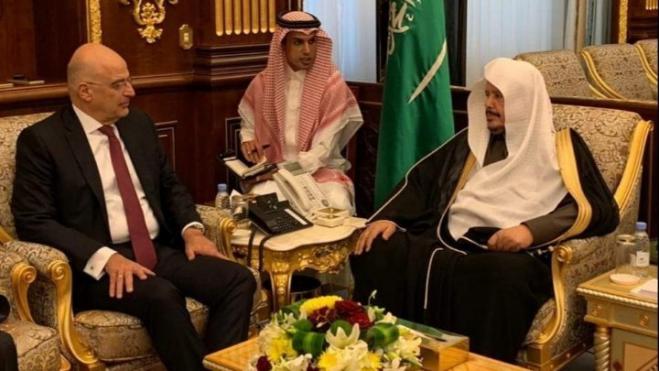 Foreign Minister Nikos Dendias will carry out a series of visits to countries in the Middle East, starting with Saudi Arabia on Tuesday, where he will hold talks on important regional issues, focusing on developments in the Mediterranean following the signature of memoranda between Turkey and Libya, as well as bilateral talks.

Then, at 9:35, he was received by the King of Saudi Arabia, Salman bin Abdul Aziz Al Saud.

At 10:15 he met his counterpart, Faisal bin Farhan Al Saud, while at 12:00 he will meet with Saudi Minister of State for Foreign Affairs Adel al-Jubeir and at 13:40 with Public Investment Fund (PIF) Governor Yasir Othman Al - Rumayyan.

On Monday, Dendias had a meeting with UN Secretary General Antonio Guterres in Geneva and explained to him the reasons why the memoranda signed between Turkey and Libya were considered void.

Meanwhile, according to diplomatic sources, in a letter to the UN secretary-general and the president of the Security Council, Egypt has declared these two memoranda void and invalid and demands that they not be registered.