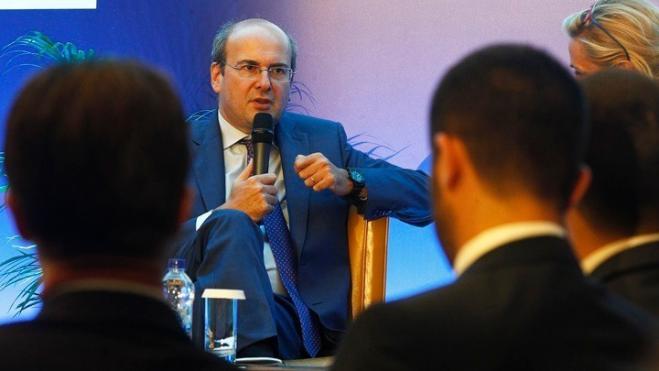 Greece is building a "coalition of legitimacy" with energy projects as a lever aiming to turn the southeastern Mediterranean into a zone of cooperation, Environment and Energy Minister Kostis Hatzidakis said in an interview with SKAI radio on Tuesday.

Hatzidakis referred to the network of Greece's initiatives which do not turn against anyone but create, as he noted, "a coalition of legitimacy and cooperation in the southeastern Mediterranean". This includes not only the signing of the interstate agreement among Greece, Cyprus and Israel on the EastMed natural gas pipeline on January 2 in Athens, but also the progress in LNG (FSRU) depot in Alexandroupolis as well as Greece, Cyprus, Israel electricity connection.

As the minister said "all three projects have a very specific context and incorporate specific messages, they are not theories. These works in combination with the high diplomatic action that Greece has developed in the last period show that the country has a multidimensional foreign policy with prestige and presence. We do not claim that we have Turkey in our pocket and we can eliminate the problems by magic. We are taking advantage of all the available possibilities as well as the fact that we are members of an international alliance in order to proceed further. We also address Turkey and say that our peoples do not deserve policies that send us back when we can live in a period of peace and cooperation."

Hatzidakis pointed out that "we want the southeastern Mediterranean to turn into a zone of cooperation, initially economic, in the interest of all the people" and made special reference to the EastMed Gas Forum that will be held in Cairo on 15 and 16 January. "It is a forum for natural gas in southeastern Mediterranean that tends to become a cooperation organisation on permanent basis. The organisation includes Egypt, Greece, Cyprus, Israel, Jordan and the Palestinian Authority, countries that have or had differences, sending the message that we must gradually put aside our differences and move forward. This is exactly the message that we are sending to Turkey and I remind that approximately 15 days ago President Erdogan said that this pipeline cannot proceed because he would stop it.
"With the signing of the EastMed in a few days (January 2, 2020) we are sending a message, I would not say against Turkey, but in favour of the international legality and cooperation, which however, has the element of determination, and strong support of legality and I believe that Turkey should understand that," Hatzidakis said.
Asked on Italy's position, he said that, according to information, Rome, "is open to follow, immediately after the signing of the agreement among Greece, Cyprus and Israel, as it is positive in principle but there are some internal and environmental policy problems that are pending. After all it has agreed on the funding in the context of EU preliminary studies on EastMed."
Regarding US position on the project, he referred to the presence of Assistant Secretary for the Bureau of Energy Resources (ENR) at the U.S Department of State at the trilateral Greece, Cyprus, Israel meeting on energy issues that was held early August in Athens. "Of course, in order for the EastMed project to proceed, it should be economically sustainable and we are working together with Israel, Cyprus and the European Union that support the project, towards this direction. The fact that Cyprus and Israel have natural gas for exportation and the fact that there are companies that support the project constitute an important first step in order for the project to proceed."