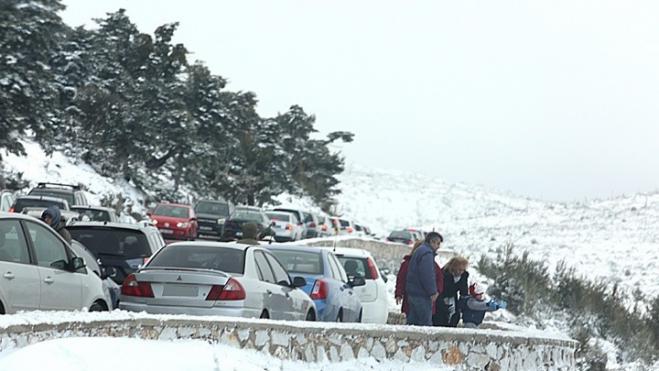 The bad weather caused extensive problems in the Attica region on Sunday, where several roads were closed and emergency services had to intervene to rescue trapped motorists during the night.

Trucks were banned from using the Athens-Lamia national highway due to snow at Schimatari until mid-morning on Sunday and turned back at the Afidnes toll plaza. The old Athens-Thiva highway was impassable without snowchains and had been cut off at Mandra until the morning, while the Hasia and Parnitha roads remained closed.

The road over Mount Penteli was also closed during the night, from both Dionysos to Nea Makri and from Anatoli to the military hospital.

The fire brigade was called in several times to rescue people trapped in their cars, at Mandra, Vilia and Ippokratio Politia.

Attica Region civil protection services remain on standby, meanwhile, to assist in any further problems that may arise and minimise the inconvenience to the public due to the bad weather. Regional authority teams worked through the night to keep roads clear in Parnitha, Penteli, Vilia, Kriekouki, Porto Germeno and Kantza.

They also assisted in fire brigade operations to rescue trapped scouts from a scouts camp in Mandra and a group of French tourists trapped by snow in a van in Kaza, Attica and efforts to restore power in Vilia.
Strong northerly winds reaching up to 9 Beaufort continued to disrupt ferry links on Sunday, with no ships sailing from Piraeus and Rafina to the Cyclades islands and Marmari, Evia while hydrofoil routes to the Saronic Gulf islands were suspended.

The ferry lines from Agia Marina to Nea Styra, Arkitsa to Aidipsos and Glyfa Fthiotida were also not operating and a sailing ban on the Alexandroupolis-Samothrace line remains in force.

Those intending to travel by ferry on Sunday are advised to contact local port authorities or their travel agents before setting off, in case of changes or cancellations of scheduled ferry journeys.