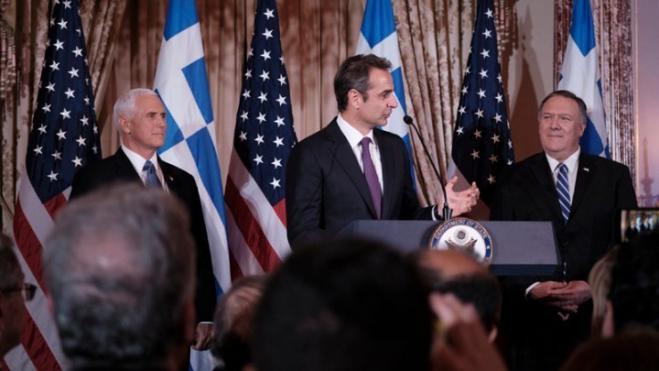 In a particularly relaxed and pleasant climate, Kyriakos Mitsotakis was the official guest of US Vice President Michael pence at the State Department.

Pence along with Secretary of State Mike Pompeo received the Greek Prime Minister at a reception in his honor at the Benjamin Franklin Room.

The US Vice President and Foreign Minister spoke with very flattering remarks about Mr Mitsotakis, in the presence of some 300 guests, with the Prime Minister stressing that he is "very proud to be Greece's leader at this historic moment in our relations that they will become more and more powerful. "

"You are right Mr Vice-President, the relationship between our countries has never been stronger," Prime Minister Kyriakos Mitsotakis said on Wednesday addressing US Vice President Mike Pence at a dinner in honor of the Greek prime minister at the State Department.

"I am very proud to be leading Greece in these historic times for our bilateral relations, a relationship that can only go from strength to strength," the prime minister said, noting that the discussions in the US capital ranged from the geopolitical situation in our region to investment opportunities.

"Greece has been, is and will remain the most sincere US ally," he said adding that the United States supports Greece in the struggle for its values and its future while focusing on economic growth and the creation of prosperity for all Greeks.

Mitsotakis said that Greece is following the example of the United States in reducing taxes and the Greek economy is getting better and better.
He also invited US investors to take part in this new chapter for Greece.

"We are now ready to write a new chapter in our history, and as we enter the third decade of the 21st century, I am sure it may be the decade of Greek success," the Greek prime minister stressed.

Pence: Thanks to Mitsotakis and Trump our bonds are as strong as ever

"I am proud to report firsthand that, thanks to your leadership and the leadership of President Donald Trump, the bonds between the United States of America and Greece have never been stronger," US Vice President Mike Pence said on Wednesday referring to Greek Prime Minister Kyriakos Mitsotakis.

"Last year alone, our two nations engaged in nearly 3 billion dollars in trade.  But it is not economic exchange that defines us. It is really a shared philosophy of government," he said and added:
"I saw the energy between you and President Trump yesterday in the Oval Office.  I saw the friendship between you. And I also saw the common purpose, as Secretary Pompeo just reflected, in President Trump and in you, Prime Minister Mitsotakis.  They are two leaders who believe that when you let people keep more of what they earn, when you roll back red tape, when you make government more efficient and you drive low-cost energy, making it available to job creators, economies proposer. And America and Greece are prospering thanks to your leadership and the leadership of President Donald Trump."

Pence underlined that both nations share an incredible history. "But it really is obvious to me, particularly being in the Oval Office yesterday, seeing the connection between you and President Trump - two energetic leaders with a conviction and a belief in freedom, and a drive to be able to put it into practice to improve people’s lives - that the best is yet to come."

On his part, Secretary of State Mike Pompeo praised Greek economic reforms, saying that the US government has implemented a similar policy which had a positive impact on the citizens welfare. "I know that will happen in Greece as well," he underlined.

"Think about the welcome turn of events: Greece is truly showing all of Europe the way forward on economic prosperity. That’s truly remarkable, Mr. Prime Minister," Pompeo said and added:
"As for the US government, we will keep supporting you as a leader in Europe. We will keep supporting your prosperity, your security, and your democracy. The future will only grow brighter for our countries and our relationship together."
"So, on behalf of the American people, in celebration of the economic partnerships, the military partnerships, and the deep heritage between our two nations, allow me to join with all of you to raise a glass," he said.