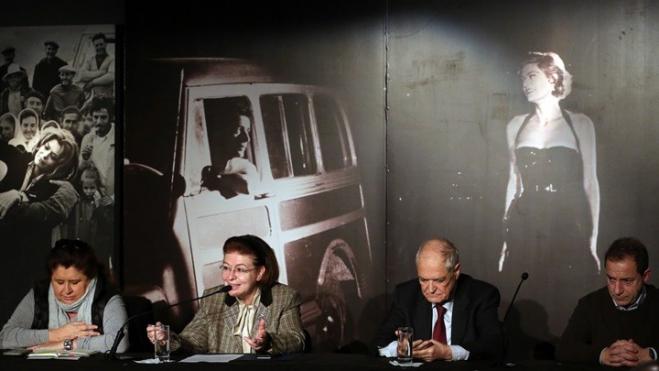 The events for 2020 Melina Mercouri Year - commemorating a centennial since the birth of the actress, activist and politician - will begin on January 29 with the presentation of proceedings of a one-day conference devoted to the return of the Parthenon marbles to Greece, Culture Minister Lina Mendoni said on Tuesday.

A schedule of events was presented at a press conference at the Plaka-based Melina Mercouri Foundation. It included the foundation directors and the artistic director of the National Theater. The committee overseeing the events includes former French Minister of Culture and personal friend of Mercouri, Jack Lang.

The presentation at the Acropolis Museum will be attended by President of the Republic Prokopios Pavlopoulos. This event was chosen to be the inaugural one for the year "because of the efforts Melina made to fulfil a dream we all believe will one day come true, the unification of the Parthenon sculptures on the Parthenon," Mendoni said.
In February, the museum of Nafplio, Peloponnesian Foundation of Folklore, will devote an exhibition to "Our own Melina", while this year's acting awards established in her name will be handed out at Rex theater in Athens.

In March, the foyer of the UNESCO headquarters in Paris will hold two exhibits, one on the return of the Parthenon sculpture from Britain and another on antiquities smuggling, "two issues closely related," Mendoni said.
In June, singer Alkistis Protopsalti will perform songs associated with Mercouri at Epidaurus' Little Theater. The same month, photographs, correspondence and costumes of the iconic Greek personality will be inaugurated at Technopolis.

The city of Piraeus, where her family left its legacy, will be hosting an event on her birthday, October 18, and promote other events as well that Mendoni said would "include surprises which will be revealed that day." On the same day, the Melina Mercouri Foundaton and the Ministry of Culture will hold a one-day meeting on Mercouri's initiatives as minister of culture, and on her activism. "Melina was an activist in everything she did," the culture minister said.

Mendoni also referred to an institution introduced by Mercouri, the public regional theaters (DIPEThE), an innovative idea at the time that is now in need of upgrading to enhance its presence regionally. A meeting to that effect will be held at the ministry on Wednesday with all theater directors and presidents, and related mayors and regional directors, Mendoni said.