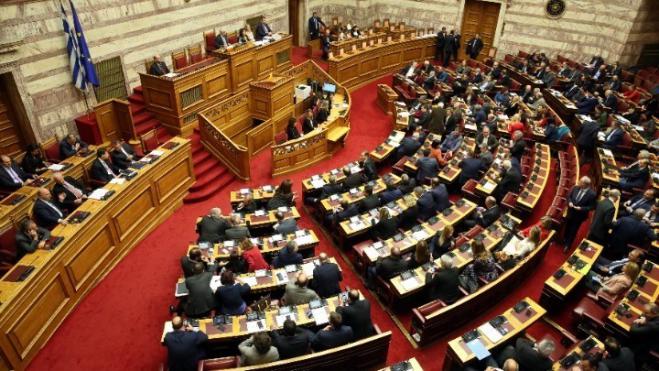 The Greek Parliament ratified the updated Greece-US cooperation agreement on Thursday night, with 175 votes for, 33 against, and 80 declaring "present" out of a total of 288 MPs voting.

Supporting the Mutual Defence Cooperation Agreement (MDCA) were the parties of ruling New Democracy and Movement for Change (KINAL). Main opposition Syriza voted "present", while all other parties - Communist Party of Greece (KKE), Greek Solution and MeRA25 - voted against it.

Absent deputies sent letters of vote intent to the presidium but their vote was not counted in the results.

SYRIZA wanted to freeze the bill

A "freeze" of the mutual defense cooperation agreement with the US and review of the data for its approval, was requested by SYRIZA rapporteur Thodoris Dritsas during the debate in the Parliament.

"For our country, slavish relations must belong to the past. Any agreement must be made on terms of equality, reciprocity and securing all the guarantees that refer to the sovereign rights and interests of the country and the Greek people," Thodoris Dritsas said, referring to the statement of SYRIZA President Alexis Tsipras, and while Mr Mitsotakis was visiting the US, that "Greece should not be taken for granted".

Although SYRIZA, as a government, has pursued a strategic dialogue with the United States and prepared a review of the defense agreement, Mr Dritsas insisted that today it must "freeze" as important events have transpired such as Turkey's invasion of Syria and the Signing of the Memorandum of Understanding between the Government of Libya and Turkey. "Greece cannot be given while our sovereign rights are threatened in such a clear way," Mr Dritsas said.

During the Prime Minister's visit to the US we saw another reality, namely "a powerful weapon of Greece, the government sacrificed it in its choice of how to cultivate good relations with the allies," said Dritsas, noting that the government SYRIZA had succeeded in negotiating with the US not to accept the other side's request that the Souda deal be for five years, but to have an annual renewal. He also said that the other authorities had succeeded in keeping the administration in Greek hands.

KKE says an unequivocal NO

The Communist Party KKE, through GS Dimitris Koutsoumbas said an unequivocal No to the agreement as it facilitated "imperialist prospects" and "warmongering". Koutsoumbas noted that such agreements don't take into account the needs of Greek defense, but rather those of NATO and the USA. He used the possible procurement of the F-35 as an example of a misguided choice for the Hellenic arsenal.