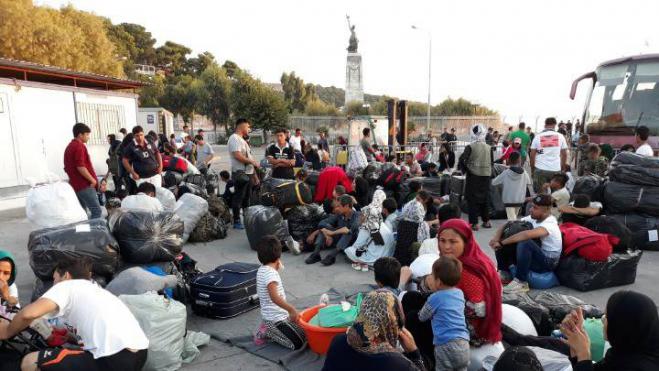 The government is today issuing a Legislative Act to expropriate "for reasons of public interest, necessary properties and areas for crisis management", government spokesman

Stelios Petsas announced. Mr. Petsas spoke of a comprehensive four-axis plan that the government is pursuing on refugee-migration and outlined the following four axes:

At the same time, we emphasize the decongestation of our islands, which bear the biggest burden, and the support of local communities, "he said.

He then pointed to targeted actions "to internationalize the problem and to form a new political responsibility and solidarity with the European Union".

At the same time, "an exhaustive dialogue has been held recently with the relevant regional and local authorities, while the North Aegean Regional Governor Mr K. Moutzouris has called for emergency measures for the islands, especially after the incidents in Moria. The Government's decision is to close down today's anarchic structures and create controlled closed structures. "

Mr Petsas then went on to announce that it was in this context that "the Council of Ministers is today issuing a Legislative Content Act authorizing the Ministry of Immigration and Asylum to expropriate, for reasons of public interest, necessary property and land to manage the situation. in order to address the urgent need to avoid jeopardizing public order and health."

Today, also, the Ministerial Decision of the Minister of Immigration and Asylum, Mr. N. Mitarakis,will follow which states the following areas:

3. Location of Zervos (adjacent to construction), Municipality of Eastern Samos.

Controlled closed structures mean defined and strict rules of internal order, which concern both the operation of the centers and the movement of those hosted. In these structures, new arrivals will be hosted in order to facilitate identification and the asylum process. Second, it will host those who have abusive behavior and, thirdly, those who are not entitled to asylum and enter the return process.

Those who remain in controlled closed structures will be entitled to controlled card exit for a specified period of time, with the structures closed at night. Any breach of an internal rule of law adversely affects the asylum claim and speeds up the return process. "