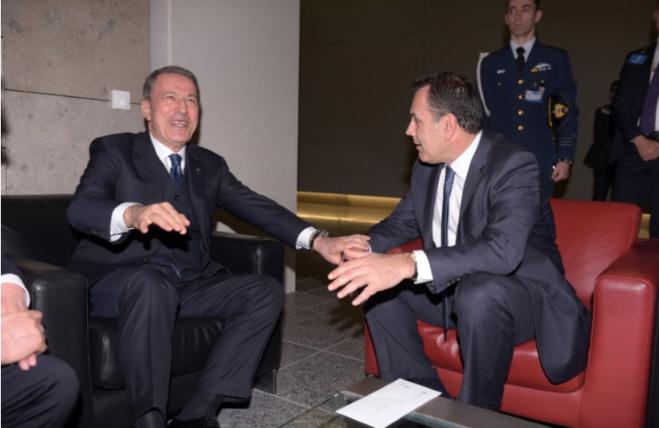 Nikos Panagiotopoulos and Houlousi Akar had a meeting of just 15 minutes on the sidelines of the NATO summit in Brussels.

In a statement, the MoD was merely restricted to announcing the two men's meeting: in Brussels".

The two defense ministers met in a good climate according to leaks. In fact there were hearty smiles in front of cameras.

During his meeting with Mr Akar, Mr Panagiotopoulos stressed the importance of open channels of communication and the need for Turkey to refrain from actions that fuel tension.

Bilateral military dialogue on Confidence Building in the Aegean was at the focus of the discussions, as on February 17 and until Friday, February 21, the two sides will have contacts in Athens with military experts and diplomats who will discuss the issues of tension in the Aegean.

Mr Panagiotopoulos is also reported to have raised the issue of Turkey's attitude towards the South-Eastern Mediterranean and the illegal investigations it is carrying out within the Cyprus EEZ.

The Greek defense minister reportedly told his Turkish counterpart that Athens would not tolerate any action that would challenge Greek sovereign rights over the Greek continental shelf.