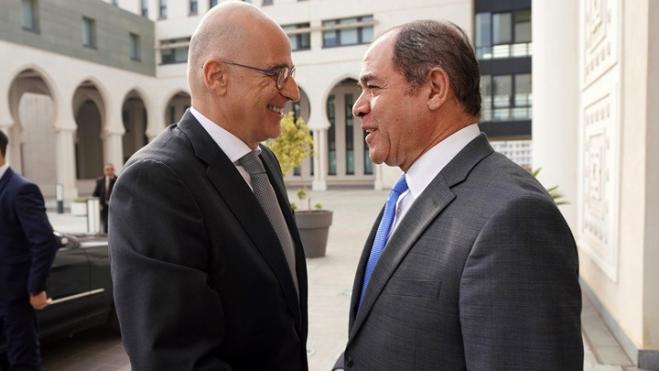 Greece and Algeria believe that there should be an end to hostilities and to any foreign intervention in Libya immediately, underlined Foreign Minister Nikos Dendias in statements after his meeting with his Algerian counterpart Sabri Boukadoum in Algiers on Thursday.

"I listened carefully to my counterpart's comment that no entity in Libya today is legally authorised to be signing contracts and aggreeements or to represent the people of Libya," said Dendias, referring to the memorandum on maritime zones signed by Turkey and the Tripoli government.

"This behaviour constitutes a flagrant violation of UN resolutions," said Dendias, adding that these "add more obstacles to the efforts of the UN Security Council, of UN Special Representative Representative Ghassan Salame, and to the continuing efforts of the international community, namely, the Berlin process."

"As a pillar of stability in the eastern Mediterranean and a country with special interest for the developments in Libya," Dendias said, Greece "is ready to support any effort for a political solution in Libya."

Dendias said that during his meeting with Foreign Minister Boukadoum they discussed strengthening bilateral relations between Greece and Algeria. "We are sharing a neighbourhood, we are both countries of the Mediterranean, this is our neighbourhood and our common future," concluded Dendias.

Earlier, the Greek Foreign Minister met with the President of Algeria Abdelmadjid Tebboune, with whom they discussed the regional developments and the enhancement of the bilateral collaboration.