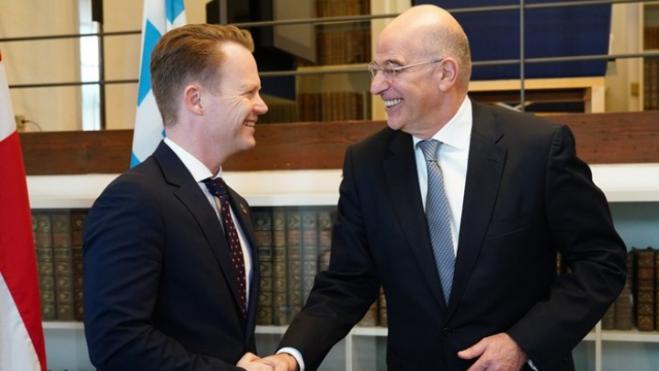 Turkey's aggressive policy threatens peace and stability in the south of the EU, Greek Foreign Minister Nikos Dendias said on Friday in Copenhagen, after meeting with his Danish counterpart Jeppe Kofod.

A statement from the Greek Foreign Ministry quoted Dendias as saying that Turkey's stance "undermines our collective efforts and stirs up challenges like migration and terrorism."

On his part, Kofod underlined, "Every Turkish activity must respect rules and laws that apply to us in the EU and our territories. Therefore, we naturally support Greece and Cyprus on these issues. It's important to show we have a EU that is founded on rules, and rules must be kept."

Dendias said the two discussed climate change in depth, and Denmark's pioneering use of Renewable Energy Sources. "We have a lot to learn from Danish know-how in this sector, in order to achieve an end to our reliance on lignite by 2028, as Prime Minister Kyriakos Mitsotakis has committed to," he said.

He also exchanged views on the asylum process in Europe, and agreed to continue their talks, while Dendias invited Kofod to visit Athens.

In Copenhagen Dendias also met with representatives of the country's Confederation of Danish Industry.