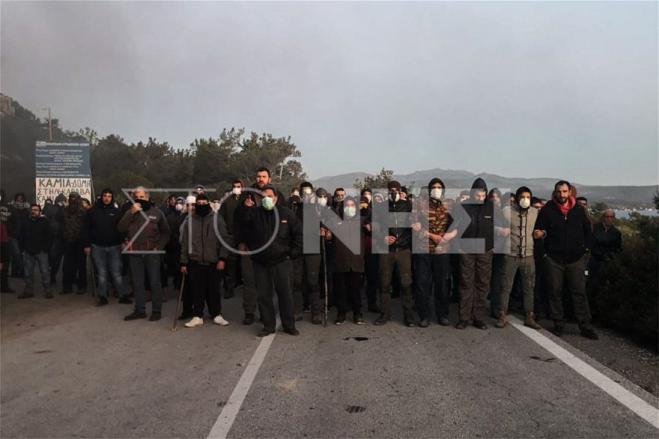 Tensions between the residents of the islands of Chios and Lesvos and the government are high, as local communities in both islands are staging dynamic protests against the government’s plans to construct closed refugee centres in areas it recently decided to requisite.

Earthmoving machinery , construction machinery such as bulldozers, excavators, trucks, as well as a heavy-duty crane vehicle of the Armed Forces landed at dawn to begin work on the construction of closed structures.

Defying the government’s decisions, the locals responded by using barricades and blocks of tree trunks to prevent works from starting at the Vrontados area, as the authorities deployed SWAT units to Chios to stifle resistance of the residents.

From the early morning hours Churches of Vrontados are ringing bells to mobilise the people.

In both ports of the two islands, scuffles have broken out between police forces and locals with law enforcement officers using tears gas to dispel the protesters blocking the machinery with personnel heading towards the designated areas where the erection of the facilities has been decided.

Roads leading to the area where the new refugee and migrant structure is expected to be built in Lesvos have also been closed by groups of residents by using heavy trucks and land machinery, allowing access only to local farmers.

In the morning, students occupied the Madamado High School and High School complex, protesting the construction of the new structure.

A popular island assembly will take place this afternoon in the village of Agia Paraskevi, whose residents own most of the land which was seized. In today’s announcement, the Mytilene Municipal Authority declared it would attend the protest in an announcement it released “the mobilisations that will be decided jointly with the representatives of the first and second instance Local Government”.

Despite the widespread protests, the Greek government appears determined to press forward with its plans even in the face of breaking ties with its locally affiliated politicians.