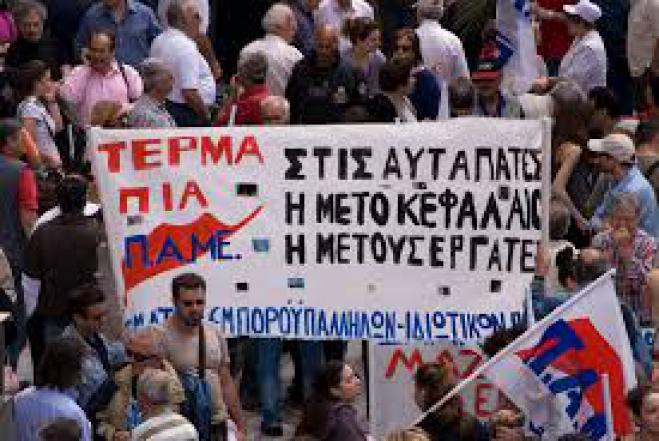 Strong police forces with riot control forces (MAT) have lined up at the site of the 37th GSEE (General Confederation of Labour) Congress in Kavouri.

Communist Union PAME protesters who have gathered outside the building have complained that their executives have been barred from entering the conference.

"It is a shame for the government, the police, the repressive forces, who today require from every single person the papers and the political identity that this trade union mafia has given them to see if anyone will go through or not. They have the names of everyone, what each one is, what party they are, what god they believe and they have given them by scabs. In other terms they will hold a democratic conference. They are forbidding entry, they have a barcode gate, and here we call on minister Chrysochoidis to take a position: Is this the role of the police? Is it here to prevent delegates from attending the GSEE Congress on the basis of their political identity?" This was stated by Christos Katsotis, an elected representative with the DAS at the GSEE congress and a member of the Communist Party KKE "on preveningt access to elected representatives by police forces "