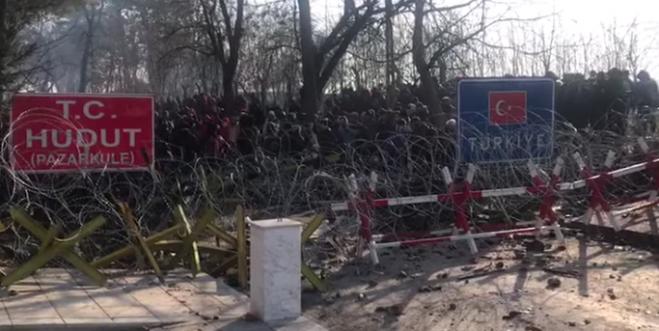 The government announcement regarding the new upgraded security measures:

In recent days, Greece has been receiving sudden, massive, organized and coordinated pressure from population movements to its eastern, land and sea borders.

This movement is directed and encouraged by Turkey. These actions are in breach of the obligations arising from the European Union-Turkey Joint Declaration.

Instead of limiting the networks of migrant and refugee traffickers, Turkey has itself become a trafficker.

Concentrated people are forcibly attempting to enter Greek territory, despite the fact that it has been made clear by the Greek side that no transit is permitted at all.

Because of its coordinated and massive nature, this relocation has nothing to do with international asylum law which concerns only individual cases.

In these circumstances, the present situation constitutes an active, serious, exceptional and asymmetric threat to the country’s national security.

The concentrated individuals are used as pawns by Turkey to exert diplomatic pressure.

Greece unequivocally exercises its sovereign right and constitutional obligation to safeguard its integrity.

For these reasons, the National Security Council, which met today, decided the following:

A new Security meeting on immigration took place on Sunday afternoon under the Greek Prime Minister Kyriakos Mitsotakis in the shadow of developments in Evros and the massive attempt by illegal immigrants and refugees to cross the Greek-Turkish border and find themselves in Greece.

The meeting was held at 6pm and new measures to enhance border security were reportedly on the agenda.

No official announcement has been released thus far.

European diplomacy chief Josep Borrell announced an extraordinary meeting of European Union foreign ministers next week to discuss the situation at Idlib and at the EU’s external borders, at the request of Greek Minister Nikos Dendias.

European officials point out that they are closely watching the migrant arrivals in Evros, while expressing their support for Greece, stressing that Frontex will help protect the borders.

The extraordinary meeting of foreign ministers next week “will be an opportunity to focus on the latest developments and continue our joint work on all fronts. We must ensure that our collective action has the greatest possible impact if we are to deal effectively with the crisis and to help pave the way for a political solution”, the statement concludes.