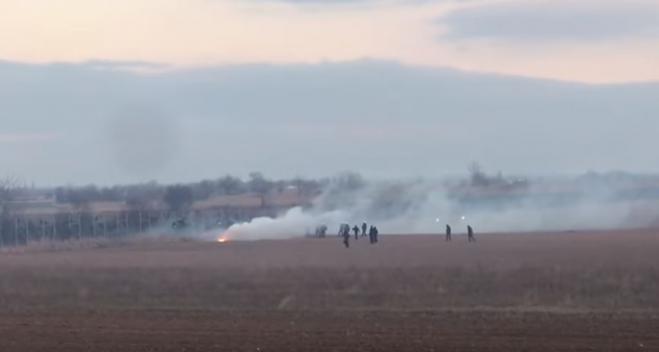 The situation in Kastanies, Evros, remains critical, with clashes raging and thousands of migrants on the scene.The whole weekend passed with countless clashes between police and army personnel protecting the border and thousands of immigrants trying to breach it.

Turkey not only fails to comply with the obligations as they derive from its agreement with the EU, but also sends – as it has threatened – illegal immigrants to Europe through Greece, assisting them in their movements.

Hours after an illegal immigrant revealed that Tayyip Erdogan provides buses for free to transport them to the Greek-Turkish borders, Turkish military vehicles – as shown in the video – where seen accompanying those buses as well.

On Saturday afternoon, the critical situation continued, and went on through the night.

At 17.30 a group of immigrants attempted to cut the fence in order to enter Greek territory.

Two Hellenic Army light armored wheeled vehicles (VBLs) immediately intervened and the soldiers with the help of the police did not allow them to enter.

When the Turkish police appeared on the other side, as it can be seen in the video, tears gases fell to Greek side.

The fence is now sealed and the fence repaired.

On Sunday, a group of around a hundred persons attempted to find a pass at another point along the border, but were spotted. Some were arrested, the rest retreated. It has not been made known how many were arrested.

Another group was ferried onto an island in the middle of the river which they believed was the Greek bank. The island, in fact, was on the Turkish side of the border, and they were trapped, finally being forced to swim the icy current back to the Turkish bank.