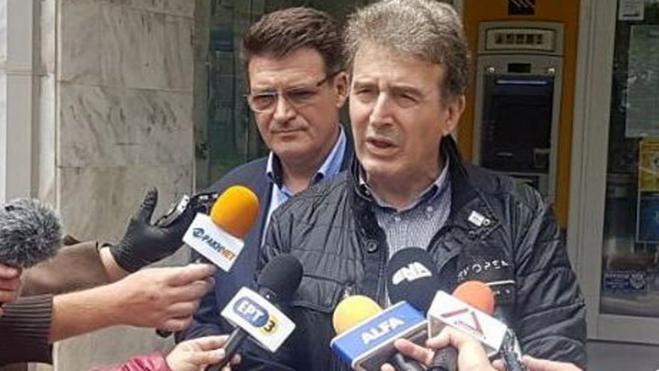 In statements after his meeting with Evros regional government officials on Wednesday, Citizen Protection Minister Michalis Chrisochoidis clarified that his presence in the northeastern Greek city of Alexandropoulis "is not news" but simply implemented the government's plans.

"We are guarding our borders and managing our personnel with absolute calm, planning and strategy. We will build our fence on the basis of our country's interests...the border guards are here, Frontex is here and the border is safe and will remain safe as long as the government is present...and on alert on a daily basis beside the residents of the area," Chrisochoidis said.

"At the orders and under the coordination of the prime minister, we are implementing a very specific plan with absolute calmness. I am here today because we are serving a plan, there is no emergency underway, nothing to cause concern. One thing constantly concerns us, which is our security," he added, speaking after a meeting with Evros Deputy Governor Dimitri Petrovits.

"We coordinate the work of security and protection of borders on a daily basis. There has to be constant vigilance, there can be no negligence and we must always avoid complacency," he said.
Commenting on the decision to reinforce security of the border with the transfer of 400 newly hired police officers, Chrisochoidis said that this restored the same number of officers as those deployed in Evros before the pandemic: "We will replace them with the 400 we hired for some months now but were unable to train due to the pandemic. After the end of September, when these police officers will also have been trained, the officers that are now here will return to their homes and stations."

Petrovits described his meeting with Chrisochoidis as "technical", adding that it had included the regional authority's civil engineers and concerned the construction of the border fence, in light of their expertise regarding the behaviour of the river and its seasonal floods.

He said that technical studies will be ready by the end of June and work will start in July.