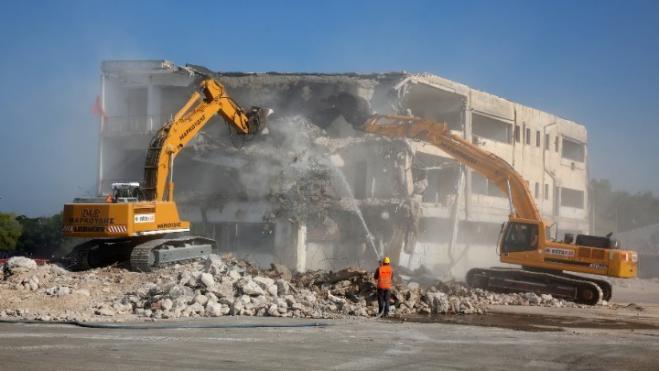 "Today is a very important day, a symbolic day. By demolishing the old useless buildings of the old airport, we are laying the foundations for the new Helliniko. One of the largest, perhaps the largest project in the Mediterranean, will be realised in this - for 19 years abandoned - area," Prime Minister Kyriakos Mitsotakis, who attended the launch of the works at the former Helliniko airport, said on Friday.

"It is the largest coastal park in the Mediterranean, but at the same time it will become a growth lever. In its full operation, Helliniko will create more than 80,000 jobs, 10,000 jobs will be created only during the construction phase. It will be a modern, ecological, environmentally friendly project, a project that will mark the beginning of a new era for Greece as we all envision it," Mitsotakis underlined.

He stressed that it was not easy to get to the point we are today. "The entire government has worked hard and patiently to overcome many of the legal and bureaucratic problems we have inherited from the past," he explained. He then referred in particular to the ministers, deputy ministers and general secretaries who worked hard for the project, as well as the secretary generals, administration officials, but also the three mayors of the neighboring municipalities.

The Prime Minister pointed out that all these years the perceptions of how we see the use of public space have also changed. "Because, here in Hellinikon, two different perceptions clashed for many years: One that wanted a huge park, a vegetable garden, that is the perception of inertia, and the other one that wanted development through the creative cooperation with the private sector that will invest significant funds based on the fact that the public sector sets the regulatory framework and ensures that this space will be accessible to all residents of Attica," he explained.

"Today we are making a start, but we have a long way to go," he said adding that this is a long-term project.

Concluding, the Prime Minister stressed: "So today we are cutting ties with the past and we are starting a more promising future. We will be together to face the difficulties that will inevitably arise in such a great project. We will be here again to monitor its progress, to see these abandoned buildings turned into hives for creative work, jobs that are so important, especially now that the country is being hit, as the whole world, by the coronavirus crisis. It is very encouraging that in an environment of economic hardship, the most emblematic investment in the country, Helliniko, is starting to become a reality today," he stressed.