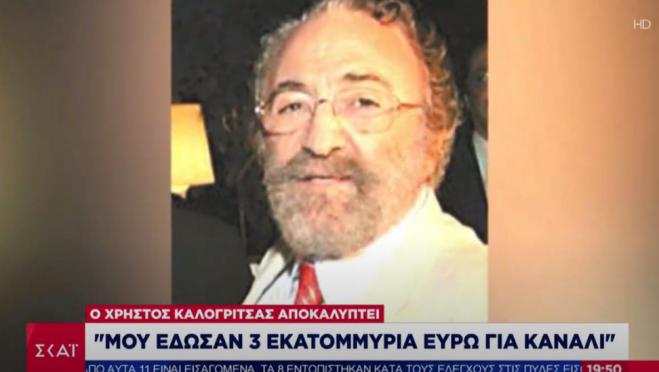 One year after the July 7 elections, which put an end to the SYRIZA-ANEL government, the revelations about the system of power that was set up or attempted to be set up are tumultous.

Nikos Pappas is the central figure of the dark paths described by the people who were at the center of different cases. He is the closest associate of the former prime minister, which puts Alexis Tsipras in the picture.

The "shop", the "White House" and the "red contractor"
The distance from the "shop" to "White House" is much smaller than the semantics of terminology used by Mr. Pappas, since in both cases he is describing the PM's office at the Maximos Mansionb. Where his office was located, one floor above that of Mr. Tsipras.

A common component of what is shockingly revealed by Sabby Mionis and Christos Kalogritsas is the attempt to set up a parastatal SYRIZA, as the other parties characterize it. Either this is about trying to manipulate Justice, or it is about controlling the flow of information.

The "red contractor", as Mr. Kalogritsas had been characterized, due to the close relations he maintained with SYRIZA, proceeded with the revelations before the Single Member Court of First Instance, where the civil dispute of the multinational construction company CCC against the company "Toxotis" was discussed. CCC has filed a lawsuit against Kalogritsas demanding a refund of 3m euros, a sum corresponding to a down payment received by Toxotis as a subcontractor for a mall built by the CCC in the United Arab Emirates. What initially seemed like a legal dispute between contractors ended up, according to the revelations of the "Proto Thema", being an odious case with virtual contracts, an attempt to set up a "SYRIZA Channel" and the newspaper Documento.

What the Kalogritsas side says?
The Kalogritsas side denies the debt and claims that the company "Toxotis" took the money "under the coordination, supervision and guidance of the… White House". When asked what the White House was, he told the court that it was the Maximos Mansion and Nikos Pappas and that the money was a deposit for his participation in the competition for the TV licenses. A parody cometition, which Mr. Pappas was responsible for and was the flag of the Tsipras government for the regulation of the television landscape. In other words, these are fictitious invoices that were given to the company "Toxotis" to buy a channel.

The method and the effort of the "White House" to find Mr. Kalogritsas a TV license, as he described in court, were crowned with success. However, the development was not what the "shop" wanted, as the total amount was not finally found to pay for the license it had acquired in the tender. At the same time, it is noted that last year shipowner Vangelis Marinakis revealed that Nikos Pappas in 2016 had asked him - transmitting the wish of Prime Minister Alexis Tsipras, as he had persuaded him - to lend Christos Kalogritsas the amount of 20.5 million euros for for this reason.

Questions about Documento
New Democracy stands on another aspect of the revelations regarding the publication of the newspaper Documento and the short journey of Costas Vaxevanis from the position of "simple employee" to that of owner.

On the part of the contractor and aspiring channel manager with the backs of the "shop", Mr. Kalogritsas, it was said in court that the 3 million eventually went to Documento (obviously not to strengthen the fight against entanglement and "independent" journalism, but to do SYRIZA's "dirty work".). Mr. Vaxevanis replies that he was not a partner but a simple employee! Who, in a strange twist of faith, then managed to become the owner ", ND states in its announcement. Officials of the ruling party recall the close relationship between Costas Vaxevanis and Nikos Pappas, but also Documento's attacks on government officials and the prime minister himself with "fake news to serve SYRIZA's plans", as they emphasize.

Tsipras in the "picture"

At a time when Nikos Pappas is a conervafter the constant revelations about his works and days during the SYRIZA government, the questions about Alexis Tsipras are increasing. What did the former prime minister know about all this? Was he in consultation with his top minister? And what will he do after the shocking news? Experienced parliamentarians believe that the discreet distances from his close associate are not enough to not tarnish himself, at a time when New Democracy and the Movement for Change (KINAL) are calling for the intervention of Justice, which must investigate what is being revealed.