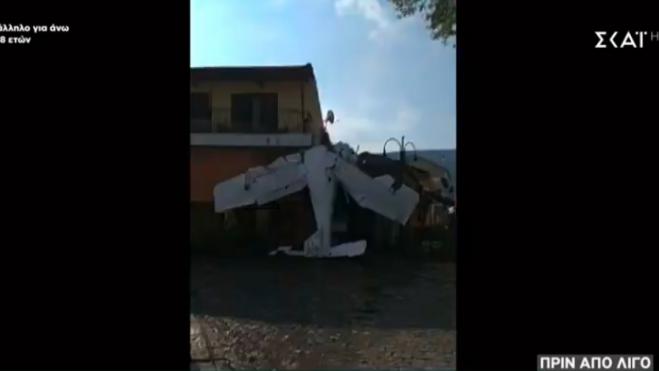 A single-engine plane crashed a few hours ago in Proti, Serres.

The plane crashed into the front of a house, with police and firefighters rushing to the scene.

Police have cordoned off the area of ​​the accident and firefighters are there for the possibility of a fire on the small aircraft.

According to information, the 19-year-old operator of the single-engine car is in good health and was transported to the General Hospital of Serres, while there are no injuries among the residents.

"The young pilot was flying at a low altitude and apparently fell on the plane tree due to mishandling. In our misfortune, however, we were lucky, because no citizen was in the square at that time, while the pilot was slightly injured, so we had only material damage. In addition, the aircraft did not catch fire, so we did not have more problems ", stressed the mayor of Amfipolis, Stergios Frastanlis

Speaking to voria.gr, he said that the training single-engine plane took off from Alexandroupolis, operated low flights for quite some time over the village, causing concern to residents.

"At one point he went to take a turn and the wing hit a plane tree in the village square, causing it to fall on the building," said the mayor. "Fortunately, no one was there at that time and we are not mourning any victims. The pilot of the aircraft is being transported to the hospital with superficial injuries," he added.

According to Mr. Frastanlis, the young pilot, who comes from Rodolivo, Serres, was transported by taxi to the hospital of Serres, where he was given first aid.