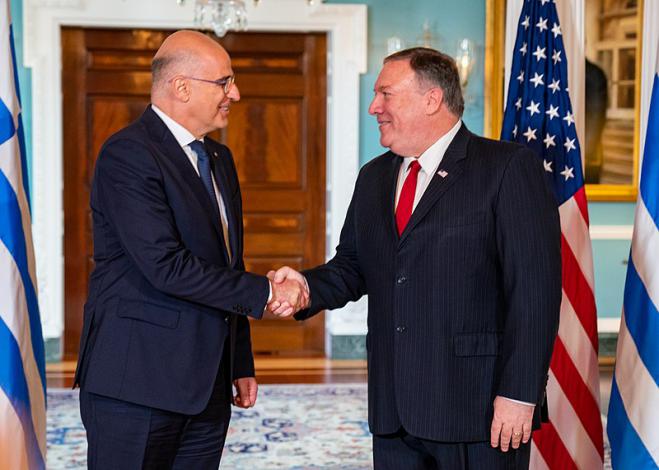 Greek Foreign Minister Nikos Dendias will have an extraordinary meeting on Friday with his American counterpart, Mike Pompeo.

The meeting, announced by the Foreign Ministry, will take place in Vienna and the discussions will focus on developments in the Eastern Mediterranean, in the light of escalating Turkish provocations.

The Greek government is now launching a diplomatic counterattack against Turkish provocation at all levels. Already, the US and Israel are on the side of Greece, which shows that the moves of the government at all levels are paying off.

The Dendias-Pompeo meeting comes after the full and clear support from Israel to the Greek government against Turkish provocations.

Clear support to Greece from Israel

Earlier, Israel through its embassy in Greece clarified that it fully supports Athens. The Israeli government maintained that "Israel expresses its full support and solidarity with Greece, its maritime zones and the right to determine its EEZ."

Just yesterday, after the meeting under Prime Minister Kyriakos Mitsotakis, Foreign Minister Nikos Dendias requested the extraordinary convening of the Council of Foreign Ministers, on the subject of the growing Turkish provocation and delinquency. According to Mr. Dendias, the request is made at a time when there is a clear Turkish threat to peace and security in the Eastern Mediterranean, Greece and Cyprus.

In fact, the Greek Foreign Minister sent a very strict message to Turkey, emphasizing: "Let me be absolutely clear: We will not accept in full. There will be no tolerance for Turkey's attempts. We make it clear that Greece will defend its sovereignty and sovereign rights. "

On Tuesday, Mr. Dendias also met with the US Ambassador to Greece, Jeffrey Payat, whom he briefed on developments in the Eastern Mediterranean and Turkish delinquency.

Mr. Dendias tweeted a photo from the meeting with the American ambassador. Both, following the security measures, wore a protective mask for the coronavirus.