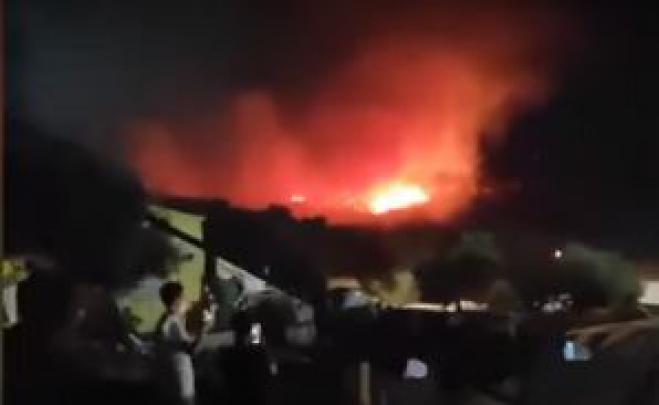 The light of day shows the magnitude of the destruction of the camp hosting 13,000 refugees and immigrants in Moria. The whole part outside the KYT (refugee reception cnter) has been completely destroyed, while a large part of the camp inside the KYT has been destroyed, and continues to burn.

Information from APE-MPE news agency states that the administration and identification infrastructures were not burned, but the Asylum Service and its equipment were completely burned. There was also damage to the Intensive Care Unit and the Hospital Unit, as well as to the air conditioning of the health unit, which was built with a donation from the Dutch government.

According to the governor of the North Aegean, Costas Moutzouris, the camp has been almost completely destroyed and the situation is tragic. As he stressed, what they are afraid of is "the 12,500 people on the street, because some of them may have coronavirus".

A large part of the population of Moria has fled to the surrounding estates, while another part has moved to the city of Mytilene, where around Kara Tepe, just before the PPC factory, a strong police force has been lined up that does not allow them to enter city.

The fire broke out around 12:00 midnight, when refugees and migrants who had tested positive for the coronavirus or had been detected as contact cases refused to be isolated. Clashes ensued with other refugees and migrants, pushing them out of the camp. This conflict at some point took on a tribal character, resulting in fires, which soon, due to the strong wind, escalated.

It is noted that, as reported, the Fire Brigade forces, arriving at the camp to attempt, were attacked by groups of asylum seekers, who hindered them in their work. At the moment, the Fire Brigade is operating in the camp with the reinforcement of air means, in order to completely extinguish the fire and then to control the area.

Three MAT squads from Athens arrived on the island
Aid from Athens and specifically three MAT squads have been sent to Lesvos, in order to deal with the problem that has been created since the night after the fires that broke out in Moria and have destroyed a very large part of the KYT.

As it became known from police headquarters, there are already strong forces on the island, however all the foreigners (about 13,000) who were in the KYT after the fires are concentrated outside the structure, where they are kept and looking for solutions for their housing.