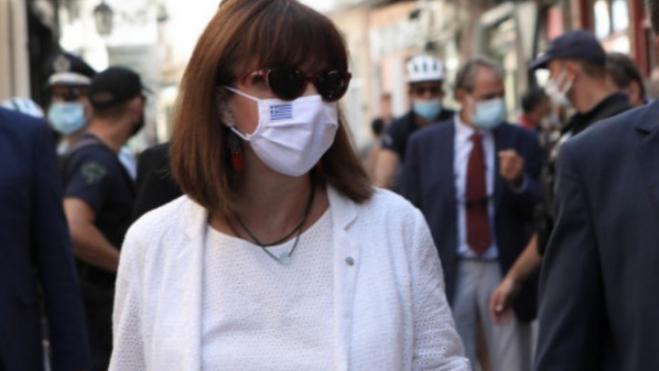 President of the Hellenic Republic Katerina Sakellaropoulou attended the opening of the school at the remote Greek island of Kastellorizo on Monday, the first day of the new school year.

Addressing the 60 pupils of the island, she wished them a happy school year, underlining the importance of education and made a special reference to the new conditions imposed to protect against the spread of the novel coronavirus, such as the use of face masks and other protection measures.

"It is difficult but we must implement it and get acccustomed to it" she said, addressing the pupils.

Afterwards, Sakellaropoulou was given a tour of the school building by teachers and the regional governor of Southern Aegean Giorgos Hatzimarkos.

The President was in Kastelorizo to celebrate its inclusion into the Greek state 77 years ago.

"The fact that the Turkish NAVTEX was not renewed is a step in the right direction. The pursuit of all must be the return to calm and normality," President of the Republic Katerina Sakellaropoulou said on Sunday.

The President of the Republic, who is in Kastelorizo for the 77th anniversary of the liberation of the island, at a particularly critical period, stressed that "Greece, not only does not threaten anyone, but is always open to dialogue, provided that good neighborly relations and the rules of international law are observed."

However, she noted that Turkey's illegal actions have caused unprecedented tension in the Aegean and the Eastern Mediterranean. "Tension is addressed not only to Greece but also to the EU and NATO, as peace and stability in the region are threatened," she added.

At the same time, she pointed out that "our country follows the path of diplomacy and dialogue. We are in constant cooperation and communication with the international community and our partners, who show their support in practice. We do not succumb to threats or intimidation."

In addition, she stressed that "the patriotism and self-denial of the inhabitants of our remote island is an example for all of us. They symbolize the unity of our people and the commitment to the defence of the national interest."

Finally, she underlined that "immediate de-escalation on the part of Turkey is a necessary condition for political debate, on the basis of international law. We hope that logic will prevail, for the common interest of all the peoples in the region."