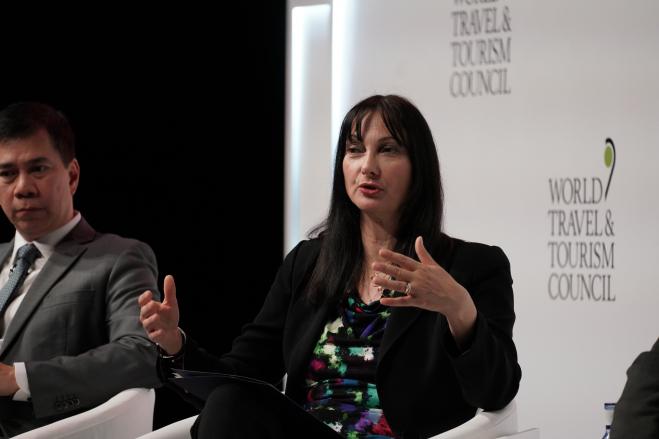 SYRIZA-Progressive Alliance MEP and former Minister of Tourism Elena Kountoura gave an interview to Costas Argyros that was published in Greek on rosa.gr about the mistakes made with the "opening" of tourism, the prospects of the industry and the need to create a European mechanism for its management.

The tourism sector was hardest hit by the covid-19 crisis. What went wrong with the "opening", what could be done better and what are the lessons for the future?

Unfortunately, the opening for our tourism took place without uniform protocols at all the gateways of the country with errors, delays, and omissions. Sampling was not sufficient to stop imported cases. As I had pointed out in a timelymanner in my public speeches, only the obligation for a negative test for the virus before entering our country and a brave program to support domestic tourism could have minimized the health and financial crisis in the tourism industry.

The European Commission has also shown unwarranted inaction, resulting in great suffering for thousands of travelers and, unfortunately, the resurgence of the pandemic in many parts of Europe. The chaos that continues to prevail even today must stop immediately and simple, proportionate, and effective single European rules must be introduced for all.

Do you think that the opening of tourism ultimately contributed to the outbreak of the pandemic we are experiencing these days?

Greece before the opening of the tourist season was one of the few countries that were a safe destination and its image worldwide was very positive. With the sanitary measures taken and with the discipline and sacrifices of the Greek people, the first wave of the pandemic was dealt with satisfactorily.

It is undeniable that the opening up of tourism in the superficial way that took place has contributed drastically to the recent outbreak of the pandemic. The sampling test unfortunately allowed many asymptomatic carriers of the virus to enter our country and the virus to spread to tourist destinations.

How should workers in the sector, many of whom have been facing the unemployment spectrum for months, be reinforced?

Tourism personnel are trying to survive an unprecedented crisis without sufficient support from the state. Many seasonal workers and self-employed persons have had no income since the fall of 2019, while the course of tourism for 2021 will be uncertain. Scientists predict that the pandemic will last and that 2021 will be another difficult year for health.

We need front-end measures to support workers and strengthen small and medium-sized enterprises to stem the tide of bankruptcies and stop layoffs. The government of Alexis Tsipras left an extremely important budget cushion of 37 billion, which the government had to use to effectively support the tourism sector. If we wait for European support, which will start gradually from 2021, it will unfortunately be too late for thousands of workers and companies facing suffocating financial obligations now.

Tourism has been hit all over Europe. Are there any initiatives in the European Parliament for a more coordinated European response to the sector's problems?

I have been fighting in the European Parliament from the very beginning of my term to emphasize the importance of the tourism sector for the economy and employment and to recognize the need for common European tourism policies, which unfortunately do not exist today.

An example is my proposal to set up a European tourism management mechanism. A proposal that unfortunately turned out to be prophetic, as the collapse of "Thomas Cook" followed and now this catastrophic pandemic. My proposal has been adopted and is now one of the European Parliament 's strong demands with the support of all political groups.

The European Parliament set out its position on the future of tourism following the pandemic in a resolution in July. The resolution calls, inter alia, for common health rules for transport and tourism, common rules and criteria for opening borders. It has incorporated my proposals for direct support for small and medium-sized enterprises and employment, for a virus-free test for travelers free of charge, for the creation of a European social tourism program and a European guarantee mechanism to ensure liquidity in the industry, and direct consumer compensation .

You mentioned the Moria incidents last week. Do you think that there is indeed a correlation of forces that allows us to hope for a European solution?

A European solution to the refugee issue is imperative. The responsibility and burden for the management of the issue can not be limited to Greece and the Greek islands. Any solution that does not recognize the responsibility and mandatory participation of all Member States is doomed to fail. The new "Asylum and Immigration Pact" should include the mandatory and automatic relocation of asylum seekers to all EU Member States and a fixed and predetermined refugee distribution rate.

The process of revising the Asylum and Immigration Pact will be long and arduous. We must be very careful and persistent in our positions and use every possible means of European diplomacy in all European institutions to achieve a positive solution.