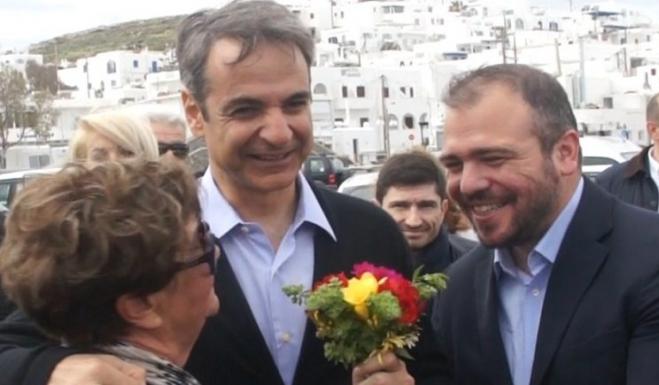 Cyclades deputy for New Democracy (ND) Filippos Fortomas was hosted on "Mediterranean in Red" (105.4) and on the show "Shades" with Lambros Demertzis. He referred to his very important interventions for the exemption of ENFIA property tax for the smaller islands and the issues that arise with schools.

So far it has not been done, but let us say that the Prime Minister from the podium of the Thessaloniki International Fair announced the exclusion of 26 islands from ENFIA, 26 remote and small islands, and obviously a choice was made throughout Greece and not only along the logic of remote islands. Thus, 26 small islands were selected, including many islands of the Dodecanese, Gavdos, Othonoi near Corfu, and mainly islands bordering Turkey. In this logic and because there may have been a – understandable I would say - misunderstanding by some that two or three small islands of the prefecture of Cyclades will be included, we made this intervention to the minister and the prime minister: that there are 6-7 islands of the prefecture of the Cyclades of which even 5 could join and which are, in proportion to the area and the population, smaller than the announced 28 islands. So we ask for the inclusion of some islands -even symbolically- from the prefecture of the Cyclades since they are islands that lie on the barren line [infrequent shipping routes] and have common problems with those of the remote areas, and we are talking about islands and not Municipalities. So these are mainly islands of the Small Cyclades because I made a check compared to what has been announced and it is mainly the Small Cyclades and Thirasia ...

Is Anafi among them too?

Anafi is the smallest Municipality of the prefecture of Cyclades but it is not the smallest island, because Thirasia is not a Municipality and the Small Cyclades is not an individual municipality but they are islands that have their own local problems. And Anafi could be if this could be expanded a little more. So, without becoming specific and without making divisions, we asked for the integration of the small islands of the prefecture of Cyclades so that there is some consideration for them and for there to be an exception for them and to implement the measure of the abolition of ENFIA, hoping by pushing in any direction: either with some letters, or with some legislative interventions, or parliamentary ones towards the government in order to extend this measure. And we think the cost would be minimal compared to what these small islands face mainly during the winter months.

In your parliamentary activity was also the modification of the legislation that concerns the transportation of students to schools also taking into account insularity. What exactly did you mean and what do you think should change in relation to legislation to ensure that social groups like children and their transportation to schools?

It is a problem that we have faced for the last two years and it makes a terrible impression on me because Mr. Syrmalenios is now excited and wondering and making some interventions in parliament when the legal framework of 2018 is being implemented at this time. It is a government decree of 2018 that has been implemented with the legislative framework that was then voted, which decision was implemented in 2019 again with many problems and this year, ie 2020. So these are problems that we have been handed down from the previous government, it is bad legislation, distortions that we have inherited and we come within a legal framework which allows the transportation of students to the district (in some contexts of course) and gives them money. So the Region comes to implement the bidding, to do it within the framework given to it by the government decree, ie the Joint Ministerial Decree (JMC) of various ministers. Seeing that the decree has a lot of ambiguities (there is a window where it gives the Region, in some cases, to have oversight and apply some differences), we are asking for it to be clearer. Because there are many employees who are obviously afraid of not taking on responsibilities so they apply the law exactly to the letter without any deviation, afraid, even when there is no pressure from above. There are such phenomena. So we come to emphasize the need to integrate within the decree social criteria, namely: single-parent families, people with disabilities and people and groups and residents who do not live in a village but in some settlements or in some remote areas where no transportation is provided for. For example, there was a case in Amorgos -if I remember well a girl with special needs- whose transportation from Tholaria to Choralast was undertaken by the the Municipality (which according to the JMC that was not implemented, did not provide for such a thing). So the same thing happened this year: with the exception of the Region and very correctly with article 1 of the JMC I think we will solve this problem. This legislative provision that has been implemented has gaps, there are omissions by the previous government without respecting the term insularity and without providing for such a thing. So I think that the JMC could give the opportunity to the Region and the local government to apply it with whatever geographical or other peculiarities exist in our islands because, you know, Mainland Greece should not be treated the same as insular Greece and I have said it during every step of the way. So respecting all this and also the distance but also the social and the geographical peculiarities, I think that there can be a modification on it.

Turning to the issue of tourism I would like to ask you, at the end of the day, for entrepreneurs it seems that we are about 50% of what last season brought in with revenues reaching 3 billion euros compared to 2019 and 2018. Nevertheless it seems that the Cyclades came out not intact, we all felt it in the tourism sector, but it will definitely require an effort so next year it can stand up.

I think that in the midst of the pandemic and with the forecasts being quite ominous at the end of June, I think that 50% is quite promising for 2020, a difficult year for business, for our affected islands. Each in a completely different way because it has a completely different tourist structure and addresses completely different audiences and markets. Thus, islands that are aimed at foreign tourism, not domestic, were affected and this was very evident in both Mykonos and Santorini, with all the problems that existed and all that was left out. So I think that if we remain safe and healthy because that is the most important thing, the government will come with some understanding to the businessmen and with some measures that the prime minister has announced (and I think that even if they need to take other measures financially but God willing we will not have to go to a general or a local lockdown because this will be financially burdensome) will be dealt with. If there are still financial margins, I think that the government will give these to the entrepreneurs because they are the locomotive of the Greek economy and also those who make a living around tourism. So I think 2021 looks more optimistic. Of course, it is very difficult because we can no longer turn to foreign markets and there is a difficulty in movement. I think it will be more difficult especially for the financially weakest groups, and the government first supports the weakest financially and then moves on to the other classes. Nevertheless, I think that 2021 seems to be better than in 2020 because let's not forget that we only operated for two months, the season was very short. It seemed that we saved it because talking to experts and people in the market it seemed that there would be a very big drop, so 50% is quite optimistic and proves that the government did the right thing by opening the flights - with some measures of course because there were voices urging that we opened wrongly - and we have all that is happening today. So respecting all of us and the public, I think 2021 will be much better with a better season as long as, I repeat, we remain healthy and safe.