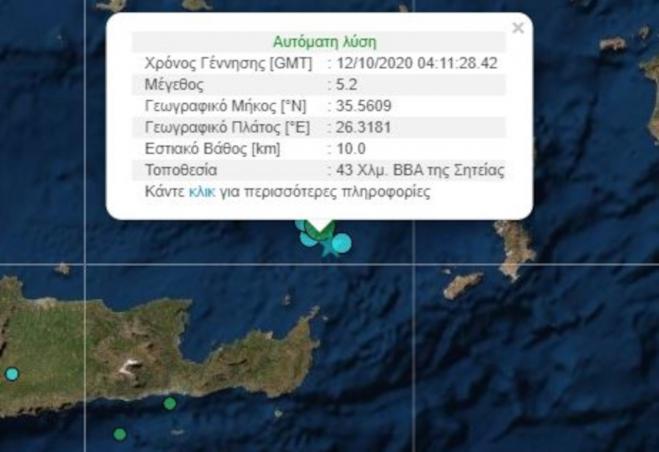 A new earthquake occurred recently in Crete with a magnitude of 5.2 on the Richter scale.

The tremors continue in the sea area between Crete and Karpathos from midnight, as another strong tremor occurred at 07:11 in the morning. This time, the quake measured 5.2 on the Richter scale, according to the Athens Geodynamic Institute.

The epicenter was reported at 43 km north, northeast of Sitia, with a focal depth of 10 km.

Earlier, at 03:30 in the morning, a magnitude 5.1 earthquake shook the same area, followed by several aftershocks from 3.1 to 4.4 Richter.

Although it is still early and experts are observing the phenomenon, seismologist Gerasimos Chouliaras, commenting on the successive earthquakes in Crete, said that scientifically the chances are minima that we will get bigger quakes over 5 Richter,.

Speaking to ERT, Mr. Chouliaras said "it is still early, we are watching the phenomenon". He added that the earthquakes are underwater and the epicenter is at a distance from Crete, and recommended "to be calm for a while to see how the phenomenon develops".

However, he clarified that what is happening is completely normal and that earthquakes of similar or equal magnitude are possible.