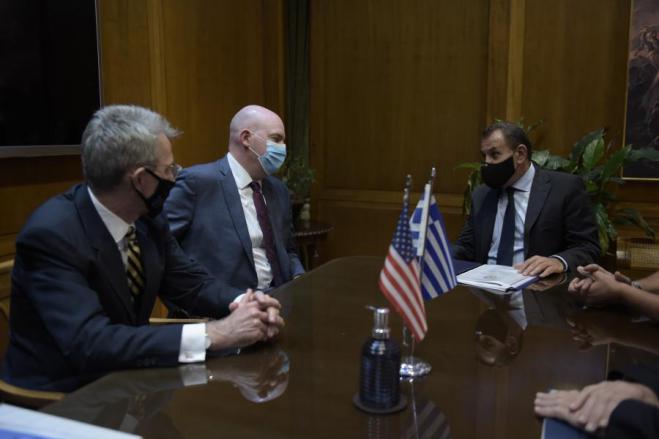 On Wednesday, 14 October 2020, the Minister of National Defence Mr. Nikolaos Panagiotopoulos met with the U.S. Assistant Secretary of State for Political-Military Affairs, Mr. Clarke Cooperand discussed defence cooperation issues, in the context of the strategic relationship and the updated Mutual Defence Cooperation Agreement (MDCA) between Greece and USA. The meeting was also attended by the Ambassador of the United States of America to Greece, Mr. Geoffrey Pyatt.

They also discussed the security challenges in the region of the Eastern Mediterranean, due to Turkey’s provocative and infringing behaviour.

The Minister of National Defence pointed out that in order to achieve de-escalation, the research ship and the Turkish warships must immediately be withdrawn from the Greek continental shelf and that no dialogue is possible under a state of threats.

The U.S. Official, Mr. Clarke Cooper projected the strong, ever-lasting bonds of the two countries and Greece’s important role, as a pillar of security and stability in the wider region.