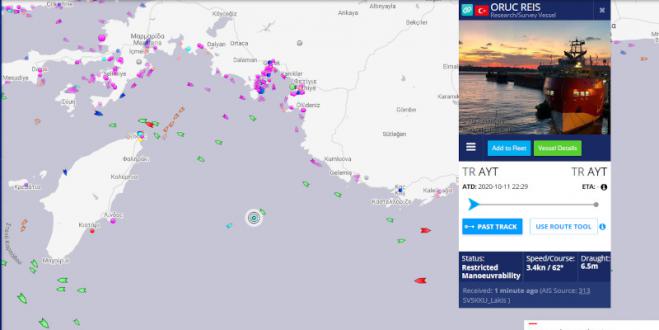 Turkish research vessel Oruc Reis is between Rhodes and Kastellorizo, where it will remain until October 27, when the new Turkish NAVTEX issued on Wednesday night expires.

Turkish Energy Minister Fatih Donmez said the Turkish research is in the middle of the program, noting Ankara's determination to continue work for another two months.

"The Oruch Reis, which has been the subject of much debate lately, continues its operations south of Kas, within the Greek continental shelf. We have extra work there for about two months. That is, we are in the middle of our program. We are determined to continue our work in the eastern Mediterranean, within the framework of international law, our interests and rights ", Donmez said characteristically, according to the SKAI correspondent in Istanbul Manolis Kostidis.

For his part, the Turkish Minister of Defense, Hulusi Akar, in his speech to Turkish army officers, after referring to the need for dialogue aimed at resolving the Greek-Turkish problems, reiterated the "Blue Homeland" underlining that the Turkish continental shelf extends for most of the sea area between Greece and Cyprus.