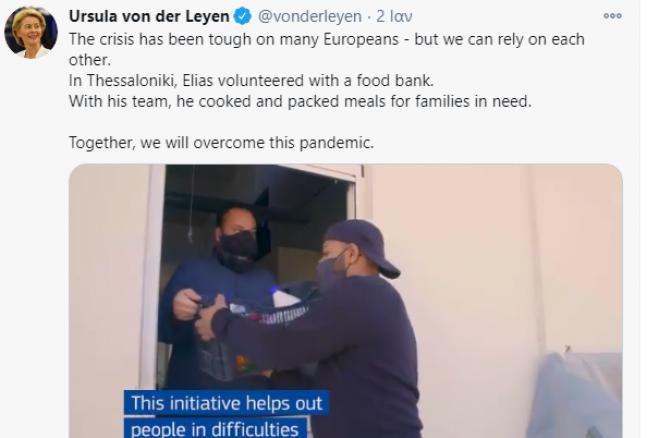 Elias Giovanidis, the 24-year-old Roma from Dendropotamos, who distributes food to the beneficiaries of the "Lighthouse of the World" is the volunteer to whom the President of the European Commission Ursula von der Leyen referred to in her tweet, setting his actions as an example of solidarity for the coronavirus.

The crisis has been hard on some Europeans - but we can count on each other. In Thessaloniki, Elias is a volunteer at a food bank. With his team, he cooks and packs meals for families in need. Together, we will overcome this pandemic ", says the president of the European Commission, uploading in her post a video that shows volunteers from Thessaloniki preparing and sharing meals.

Elias Giovanidis
"I warmly thank the President of the Commission for recognizing our effort. This recognition pushes us for even more" Elias Giovanidis wrote in his own message. He has been close to the "Lighthouse of the World" and father Athenagoras Loukataris since he was a small child. "I feel obliged to reciprocate the good they did to me and I have learned to be in solidarity," said Mr. Giovanidis, who grew up next to Father Athenagoras and now has his own family with two children.

"Father Athenagoras is not just a priest, but a role model for me and he also functioned as my father. He helped me to continue school and he is always by my side. So I, too, want to help those in need and together with my wife, who contributes to cooking, and other volunteers at the "Lighthouse" we distribute food to those in need. "

Elias Giovanidis anecdotal about the posting of Ursula von der Leyen
According to the 24-year-old, who works in a factory, he arranges food distribution almost every day and after the distribution program for the beneficiaries is cooked, he distributes the food. "I try to participate as much as I can and especially on the weekends when I have more time," he says characteristically. However, he states that he is "dumbfounded" that the president of the Commission commented on his initiative, but believes that "everyone should contribute to their fellow human beings and volunteering should be taken for granted".

The "Lighthouse of the World" and its activities started in 2004 in Dendropotamos by Father Athenagoras Loukataris and is an initiative of the Diocese of Neapolis and Stavroupolis.