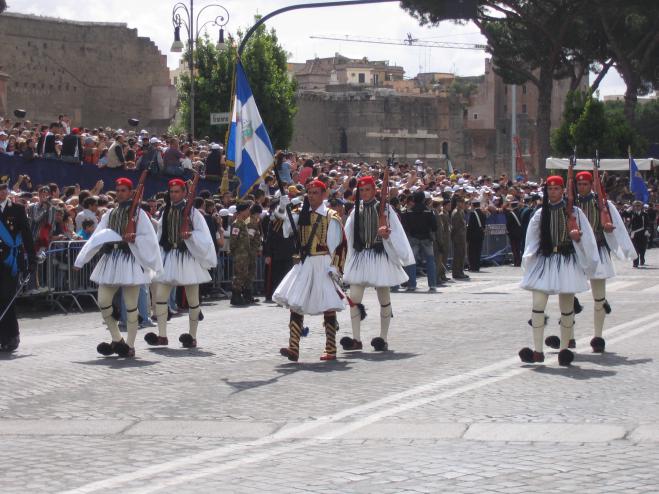 The previous two parades for the national anniversaries may not have taken place due to a pandemic, but this year's March 25th will take place, since the situation, due to the 200 years since the Greek Revolution, is special.

On March 25, the big military parade will take place in Athens, in Syntagma, of course, observing all the protection measures for the coronavirus.

The Greek Prime Minister had revealed this to Russian Foreign Minister Sergei Lavrov, with whom he met at the Maximos Mansion on October 26. Mr. Mitsotakis had sent a letter to the leaders-representatives of the three forces that had played a decisive role in the liberation of Greece from the Ottoman yoke. Indeed, in 1827, at the Battle of Navarino, the English, French and Russian fleets defeated the Turkish-Egyptian fleet, resulting in the withdrawal of Ottoman forces from central and southern Greece and securing Greek independence.

A new alliance
This is an initiative to invite the three countries, on the occasion of the 200th anniversary of the Greek Revolution, which, if successful, will send a clear message: On the one hand, the strong ties of Greece with the three countries that at the time of liberation from the Ottoman yoke they constituted the "protective forces" (after all, there were corresponding parties in Greece, the "Russian", the "French" and the "English" at that time). On the other hand, in Turkey, which the more it provokes, the more it is isolated internationally.

Kyriakos Mitsotakis had pointed out at the time that Greece is a member of the European Union and NATO, but this "does not prevent us from expanding our bilateral relations with Russia."

"Besides, 2021 is the " ​Year of History of Greece and Russia" and this double celebration will offer us an opportunity to remember the moments we spent together in the past. "But we should also build those that will accompany us in the future", the prime minister had stated in the meeting with the Russian Foreign Minister.

For his part, Sergei Lavrov had pointed out that "we highly value our relations, which have very deep roots in history, in the depths of the centuries, and of course the connection that our countries have at the historical and spiritual level."