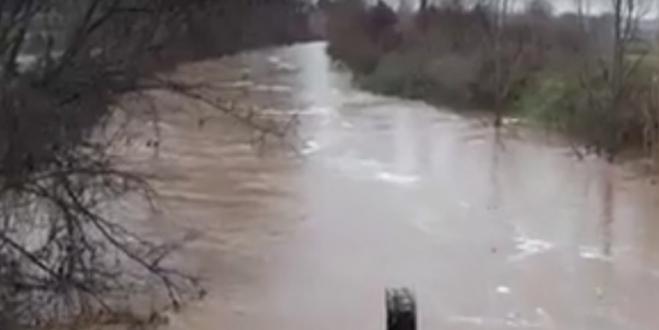 Extensive damage from heavy rain today at dawn was caused on the island of Patmos. Even more, damage was caused by rainfall in Evros, with flooding in several areas.

The damage on Patmos was mainly caused to the road network and landslides occurred in coastal areas. In fact, due to the damage, the mayor of Patmos, Eleftherios Pentes, has requested that the island be declared a state of emergency, while with his decision, the schools of the island will remain closed today.

The water level is rising dangerously in the area of ​​Erythropotamos and Mikro Derio in Evros.

Thus, the  region of Evros informs the municipalities of Soufli and Didymoteicho, the directorates of Agricultural Economy and Veterinary of Alexandroupolis and Orestiada, as well as the military units in the area to proceed immediately to the following actions:

The mayors will immediately take care to inform the residents of their areas not to approach the Erythropotamos, the stream of Mikro Derio and their embankments, as they are characterized as dangerous areas, and to remove machinery and tools from them in time. Also, if required, to cooperate with the Directorate of Technical Works of . Evros, for immediate intervention-intervention with means and staff.

The Directorates of Agricultural Economy and Veterinary of Alexandroupolis and Orestiada will inform the breeders who maintain farms near Erythropotamos and the stream of Mikro Derio about the impending increase of the waters so that they visit at regular intervals their contacts with their farms and address possible evacuation of livestock units. Finally, they will inform the directorate about the taking of the foreseen measures to avoid damages in projects under their competence.

The Directorate of Technical Works of Evros will provide staff and means for the timely supervision of embankments and flood works and to inform the GOEB for the taking of the measures to prevent damage to projects under their responsibility (irrigation pumping stations, drainage networks, etc.).

Finally,military units will implement the plans for the management of water growth in the catchment area of ​​the river Evros and its tributaries.

Meanwhile, in a relevant announcement, the Municipality of Didymoteicho states, among other things, that "a large volume of water is directed from the Greek-Bulgarian border to the valley of Erythropotamos, while in Mikro Derio the water passed over the bridge"