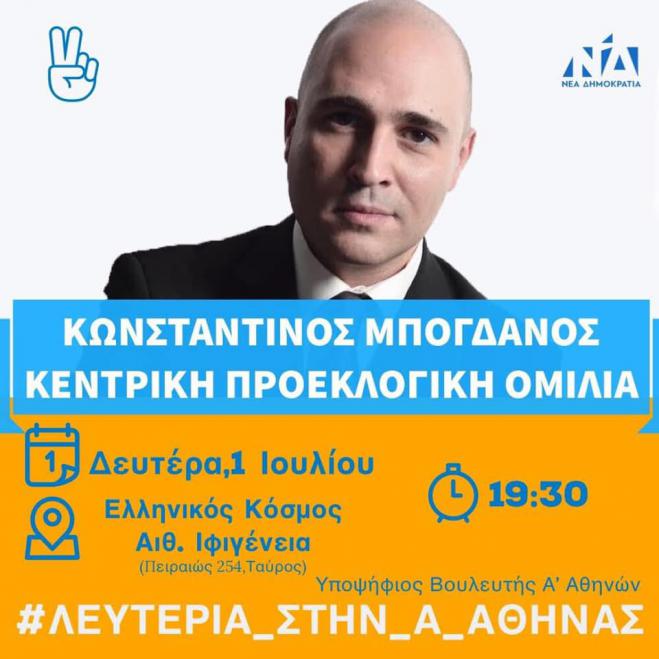 New Democracy MP Kostantinos Bogdanos described the perpetrators of the attack on his house as brazen thugs and brazen, as well as their "constant political supporters".

"The trampling enemies of democracy have once again hidden their cowardly faces behind brazen attacks. "They will not win, they will not scare us, neither they nor their timeless political supporters", said Konstantinos Bogdanos outside his house, immediately after the attack.

It is recalled that on Tuesday night, the ND MP became the target of a double arson attack. Unknown persons placed improvised incendiary devices under two cars (one owned by him and the other by his wife, according to police), which were parked outside his house in Kifissia. The explosion and fire that followed caused damage to vehicles and the wall of the house.

The explosion and fire that followed caused damage to vehicles and the wall of the house
According to the first information, bottles of flammable liquid were found under the cars. Police explosive experts and State Security police officers are at the scene investigating the case.

Tarantilis: Terrorism and its supporters have no place in a Republic
The attack against ND MP Konstantinos Bogdanos was characterized as terrorist by the Deputy Minister of Stateand government representative, Christos Tarantilis.

"Konstantinos Bogdanos, a member of the Greek Parliament, was attacked twice today in his house and car. I contacted the MP on behalf of the government and expressed my support. The state will take the necessary actions in order for the perpetrators to be arrested and brought to justice", stressed Mr. Tarantilis. "Terrorism and its supporters have no place in democracy," he concluded.

ND: "The perpetrators are supporters of terrorists and  serial killer the perpetrators - Miraculously there were no victims"
In a statement, ND emphasizes that miraculously there were no victims and that "the supporters of terrorists and the serial killer (...) today threatened the physical integrity and the life of the New Democracy MP Mr. Bogdanos and his wife" . "Silence frightens the enemies of democracy. "The organized state will do whatever it takes to bring the perpetrators to justice," New Democracy notes.

The announcement of ND in detail

Supporters of terrorism and the serial killer are constantly attacking parliamentarism. Today, they threatened the physical integrity and life of New Democracy MP Mr. Bogdanou and his wife by hitting their house and cars with a double explosive device. Mr. Bogdanos' car was completely destroyed and miraculously there were no casualties. Attacks of this kind against members of the Greek Parliament are directed against the Republic and we expect the unanimous condemnation of the murderous attack by the entire political system. Let some do, albeit belatedly, what they did not do in the previous escalating attacks against the executives and the deputies of our party. Silence frightens the enemies of democracy. The organized state will do whatever it takes to bring the perpetrators to justice.

ND spokesman Tassos Gaitanis in a post, spoke of a cold terrorist act. "Cold terrorist act against parliamentarism and freedom of speech. I condemn the attack on @bogdanosk and his family. Terrorism will not win. Democracy is not intimidated! "

"Unimaginable things", Adonis Georgiadis wrote, a few minutes after the attack on the house of Konstantinos Bogdanos.

"Unanimous condemnation of the arson attack against Konstantinos Bogdanos. Demand of all to arrest the criminals who committed it," Takis Theodorikakos wrote on Twitter.

Deputy minister for education Angelos Syrigos spoke about fascists: "Unwavering and absolute support to @bogdanosk for the arson attack he received at his home. "Fascists are those who break heads, who plant bombs, who want to spread terror," Mr. Syrigos wrote on twitter.

The 13 words of condemnation by SYRIZA
In a statement of just 13 words, SYRIZA condemns the attack on Mr. Bogdanos. "The attack on the house of the ND MP Mr. Bogdanou is self-evidently condemnable" states the gr. Koumoundourou Press.

Condemnation by KINAL
"It is self-evident that the attack on the house of K. Bogdanos was condemned. There is no room for such intimidation in the Republic. The authorities should do their job ", the party wrote in an announcement.