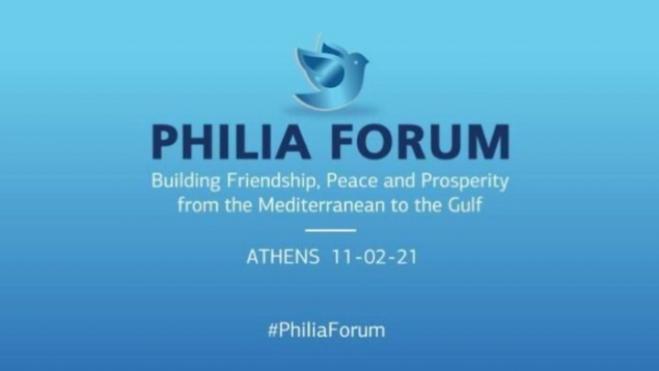 The first meeting of the foreign ministers of the Philia Forum was held on Thursday in Athens with the participation of Egypt, the United Arab Emirates, Cyprus, Bahrain, Saudi Arabia, and France.

The Forum, organised in the framework of the promotion and consolidation of multilateral ties of friendship and cooperation between partner countries in the wider region extending from the Mediterranean to the Gulf, began at 11:30 with a greeting by Prime Minister Kyriakos Mitsotakis.

The aim is to examine the prospects for strengthening cooperation in areas of common interest, including efforts to tackle the COVID-19 pandemic, as well as common security challenges in the wider region.

Highlighting the importance of the Forum's first meeting, with the participation of at least four Arab states and two European Union member-states, diplomatic sources pointed out that it underscores Greece's pivotal role as a bridge between the Middle East and the Gulf with the Balkans and the rest of Europe.

They emphasised that both Prime Minister Kyriakos Mitsotakis and Foreign Minister Nikos Dendias have made significant efforts since taking office and have taken many initiatives in order to consolidate cooperation with countries whose contacts with Greece were limited or non-existent a few years ago.

They also stressed that the special relationship with countries in the region that had traditionally friendly relations with Greece has been strengthened. In this context, they said that these initiatives have begun to bear fruit, both bilaterally and, through the forthcoming ministerial meeting, on a multilateral level.

First of all, the participation of Arab areas of the Mediterranean, but also of the Gulf, for the first time together with the member-states of the European Union. They noted that there are various regional schemes, but all of these schemes make a distinction between the Mediterranean countries and the Gulf countries.

But, the Greek initiative breaks this artificial separation and promotes cooperation in the wider region. They also said that the presence of the most populous Arab country (Egypt), as well as the Arab countries with very high GDP (Saudi Arabia, United Arab Emirates) gives special weight to this meeting.

Secondly, with the exception of Saudi Arabia, all the participating Arab states have established diplomatic relations with Israel, a country with which Greece has privileged relations, as evidenced by the recent visit of the prime minister and the foreign minister.

Thirdly, all the participating countries have signed the UN Convention on the Law of the Sea and support Greece's inalienable right to extend its territorial waters to 12 nautical miles.

Moreover, they stressed that the Philia Forum, as its name suggests, is not directed against anyone, nor is it a defensive alliance. Instead, it is open to all countries in the region that embrace basic principles, such as promoting good neighbourly relations and respecting international law.