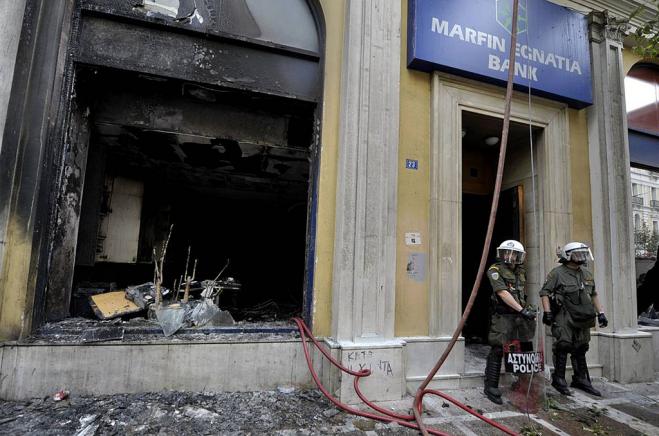 Two arson attacks on Amalias Avenue and Syggrou Avenue, a few minutes after the deadly fire at the Marfin branch on the Stadium and the adjacent bookstore "Ianos", on the fatal May 5, 2010, are - as "TA NEA" reveals - the main "guide" In the investigations to clarify the tragic incident that cost the lives of three people, including a pregnant woman!

Hellenic Police EL.AS. has now gathered cucial visual material and testimonies about the movements of at least four perpetrators of the Marfin arson in two attacks that followed: in buildings of the Ministry of Finance (Amalias Ave.) and the Attica Region Ofices (Syggrou Ave.), where by chance there were no new victims. As police executives note, the actions of the perpetrators were a path of "fire and death" that is now being determined.

According to information, the Attiki Security bureau will activate the investigation in the next 24 hours -after the prosecutor's order- which may lead in the next period of time to criminal prosecutions and arrests for the arson of Marfin. Police sources considered it possible that the results of the current investigation will be announced on the day of the sad anniversary, on May 5.

In addition, EL.AS. seems to have already gathered clearer data for the arson attack carried out by anti-authoritarians (three or four people have already been "identified") in the bookstore "Ianos", opposite Marfin, at the same time that the bank was being engulfed by flames. However, it seems that this investigation into the arson of the bookstore - where there were no injuries or deaths - will develop in parallel with that of Marfin and the moves for the two attacks will be comprehensive.

At the same time, the new data show that the review of the Marfin case was based on testimony and information from individuals from the wider anti-authoritarian space who distanced themselves as well as from eyewitnesses who had recorded visual material.

Additional information was obtained from a digital file that had been handed over to a high-ranking Ministry official two years after the incident, in 2012, by officials and which reportedly contains exploitable material.

The first arrests concern the raid on "Ianos". In fact, one of them is identified asdousing an employee of the bookstore with fuel and then trying to burn him with a Molotov cocktail. The man was rescued at the last minute by a colleague who extinguished the fire with a fire extinguisher. It is certain that this person will face a criminal charge of attempted manslaughter.

Eleven years later, the blow that stigmatized the memorandum-ridden Greece, with three dead and 21 wounded, remained all these years the act of "unknown perpetrators".

The natural perpetrators were not identified - the two accused were acquitted - everything remains the same, as if not a day had passed and the only thing that changed dramatically is the lives of the injured on Stadiou Street. Most closed the door behind them forever, without wanting to talk about the tragedy and its consequences. They changed lives, they changed professions, some changed their place of residence and none of them wants to hear about this painful story again.

Prosecutors and police are investigating three crimes: forming a criminal gang, murder, construction and use of explosives. State Security analysts have indications of the involvement of a group of 23 people who started from Patission with hoods and gloves, arrived at Stadiou Treet, broke into two and seven people led by a thin man and a mysterious woman struck Marfin and the rest hit the bookstore "Ianos".

Police are now using all means and technology to clear up the case. Videos have been determined, photos have been analyzed using special systems and specific phones have been put under the microscope of researchers.

The Minister of Civil Protection has personally undertaken the supervision of the investigations and has set the goal of sending the murderers to Justice. A year ago, in February 2020, Michalis Chrysochoidis asked a team of experienced officers to review the information available to the investigating service at the time. It was found that there was material that was not used, while the unbelievable thing is that everything was done in front of hundreds of citizens, recorded by cameras and photographers and it seems at least absurd that the crime is still unsolved. Now, however, it is imperative to solve the mystery.