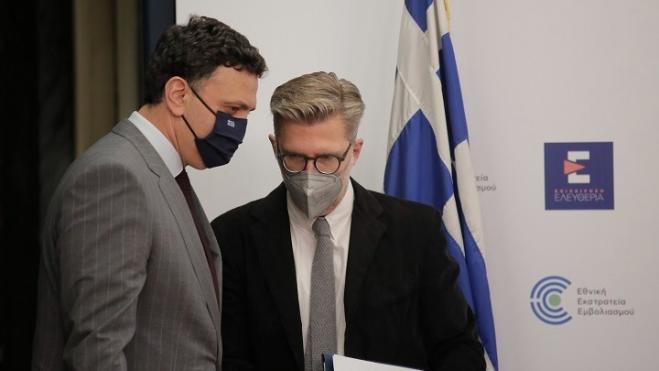 Greece's major tourist islands will have completed their vaccinations by the end of June, Health Minister Vassilis Kikilias said at Wednesday's regular live briefing on the pandemic, while 32 of the country's smaller islands have already done so.

The minister provided details concerning the "Blue Freedom" program, which prioritizes vaccinations for permanent residents of islands, and said that another 36 islands with up to 10,000 inhabitants will have been fully vaccinated by the end of May.

Residents of 19 of the country's major islands will be vaccinated under this program by the end of June. These islands include Egina near Athens, all major Ionian Islands, Lesvos, Mykonos, Paros, Rhodes and Santorini, among others. They will all receive the single-dose vaccination of Johnson & Johnson.

Assisting in the state's vaccination of islanders will be voluntary organizations and Mobile Medical Units, an initiative of the Stavros Niarchos Foundation and its 'Regeneration & Progress' non-profit-making organization to provide health services to islands without regular access to health services.

Kikilias said this past week Greece became 4th among all EU countries in the rate of inoculation per 100 residents (according to Our World in Data) and 8th among the same 27 countries for the rate of full vaccination of the population.

Currently Greece has conducted nearly 4 million vaccinations, he said, adding that 24.59 percent of the population have received at least one dose (2.6 million people), and over 13 pct have completed their vaccinations (over 1.3 million). Additionally, it is impressive that nearly 97 pct of people with appointments keep them, Kikilias noted.

Free travel between prefectures, a shorter curfew and an end to the system obliging people leaving their homes to send messages to number 13033 will go into effect on Friday (May 14), a day before Greece officially opens to tourism from abroad, the government said on Wednesday.

Minister to the Prime Minister's Office Aris Skertsos, responsible for government coordination, said in a regular live briefing that the combination of vaccinations, self-tests, and an improved National Health System allowed the country to relax the restrictions.

Briefly, the measures as of May 14 (Friday) are as follows:

- All museums will open (archaeological sites have already opened)

- SMS or text messages to 13033 (leaving home for one of 6 reasons) and 13032 (for shopping) are abolished; the systems of click-away (pickup of e-orders) and click-inside (shopping appointments) are abolished

- Travel between prefectures is no longer restricted

In addition, as already announced earlier in the week, kindergartens to reopen May 17, summer film theaters on May 21, and open performance venues on May 28.

Outdoor events, bars and receptions are expected to reopen in June, with a restriction of up to 100 people (for weddings and baptisms).

A ban on music will be upheld in all the venues, Skertsos said, for fear of infection spread through droplets.

As for the country's reopening to tourists on May 15, the minister said that the EU's Green Pass, based on a proposal by the Greek prime minister, will go in effect for EU citizens as of June 1. The Green Pass will be incorporated in the PLF form, while tests at Greek borders will continue on incoming travellers, based on the EVA algorithm system for random checks.

Greece plans to introduce a domestic variation of the Green Pass as of May 14, for the Greek islands, except for Lefkada, Evia and Salamina. Greeks travelling to islands must be able to provide either proof of vaccination or proof of no infection, through self-tests or other tests, he noted.