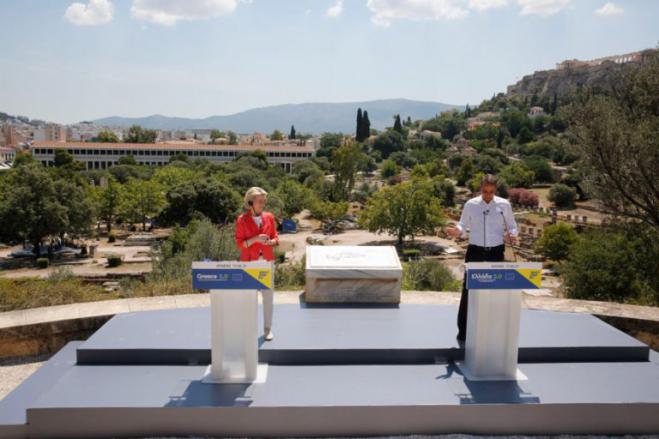 “We welcome the president of the European Commission at a historic moment for Europe and Greece. It is, I believe, the last act of the turmoil caused by the pandemic and the first of a new era,” Prime Minister Kyriakos Mitsotakis said on Thursday, at an event to present the actions planned for the national Recovery and Resilience Plan ‘Greece 2.0’ in the Ancient Agora, together with European Commission President Ursula von der Leyen.

Mitsotakis noted the first issue by the European Union of mutualised debt in support of its member-states, pointing out his support for this initiative from the start, along with eight other European leaders, and added: “Today a taboo of the past is converted into a step of the present and the future. Greece is among the countries that benefit. It is eligible for roughly 31 billion euros. It has also, however, recognised its own responsibility, being among the first to submit a comprehensive plan. With the funds from the NSRF and private actions, the funds will be close to 100 billion euros.”

The Greek plan was praised in Brussels, the prime minister said, adding that the greater part of the funds will be directed to the green and digital economy. “This is indicated by the nearly eight billion that will be disbursed in 2021. A plan is being put forward that includes an strong social and environmental footprint,” he said.

“The plan Greece 2.0 will be presented in detail in every region of the country,” Mitsotakis announced, saying this will include the full digitisation of public services and enterprises, the modernisation of hospitals, cultivating skills and major projects.

“The specific programme extends to the remotest corner of our country, touching all Greek men and women. It makes a complete plan. It also reflects the symbolis of Greece 2.0 – it is the next version of the country, it is the image of the new Greece,” he said.

Ending his brief opening remarks, Mitsotakis also referred to the symbolism of holding the event at the Ancient Agora, which had once been the centre of Athenian trade, justice and politics and the place where the philosophical dialogues that formed Greek civilisation and affected European civilisation were held.

“Growth is inconceivable without solidarity and reflection. These values were born here in order to belong to the whole world. Let us keep this in the new course we now embark on,” he added.

“Thank you so much for having me here, at the cradle of democracy and philosophy. These are decisive times and we see that after a very difficult period of the pandemic we have increasing successes, the vaccination programme is there, the recovery is underway and we can just start look at the future with hope and with confidence,” European Commission President Ursula von der Leyen said on Thursday at the Ancient Agora.

She also thanked the Greek prime minister for the important contribution of the greek govenrment as regards the green digital certificate.

“We are digitising our economies. We are making the European green deal a reality. We are equipping our societies to be stronger and resilient. Our plan is worth 800 billion euros and it is the largest recovery package in Europe since the Marshall plan and it is the recovery Europe needs now and in the future,” she underlined.