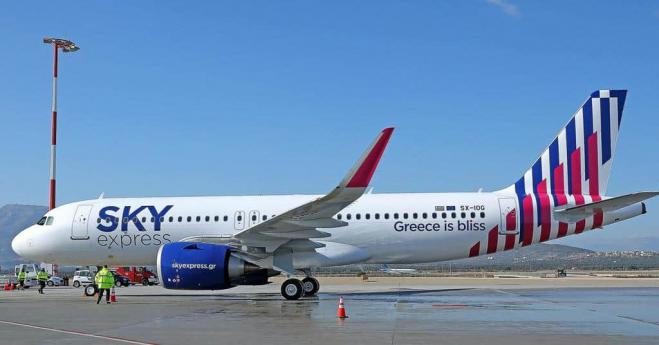 SKY express connects Heraklion with 11 popular domestic and European destinations creating bridges throughout Greece with destinations abroad. It upgrades the position of the historic city and of Crete as a whole as a key node of its network and actively contributes to the further development of the island nationally and internationally.

In particular, from today, Tuesday 22 June 2021, the state-of-the-art Airbus A320neo of SKY express fly from Heraklion State Airport N. Kazantzakis to Hamburg twice a week. In the following days, specifically on July 9, 10 & 17, direct flights begin, initially to the emblematic Charles de Gaulle airport in Paris and successively to three French cities, Nantes, Lyon, and Lille. In addition, the Heraklion-Amsterdam route will be inaugurated on July 11, while direct flights to Dortmund will soon follow.

The expansion of the network and the flight program of SKY express was planned with the aim of creating ideal conditions for the arrival of visitors from Europe for holidays or for business reasons. Direct flights save valuable time and of course favor the national effort to make the country an ideal year-round destination.

The beginning was made with the route Heraklion-Volos that was inaugurated on June 15. With a central message “One flight – Countless options in Crete and Central Greece”, the fastest growing Greek airline connects the two cities of the country twice a week.

As Mr. Vassilis Krasanakis, Network Planning & Pricing Manager SKY express points out: “Our goal at SKY express is to create communication channels full of prospects and opportunities for the whole country. The emergence of Heraklion as a hub that connects Crete not only with the rest of Greece as we have done smoothly until today, but also with Central Europe is practical proof of our commitment to strengthen Crete as an autonomous pole of tourism development. Based on our timely planning, we estimate that July and August will move at very good levels and we will achieve our goal of extending the season with premium travelers “.

Respectively, Mr. Georgios Pliakas, airport manager of the State Airport of Heraklion, Crete emphasizes: “SKY express is upgrading the airport of Heraklion and its key position. The new direct connections abroad and at home will give the opportunity to even more travelers to get to know our Crete. We are very satisfied and confident that the new venture of this great Cretan company will be as successful as everything it has done so far “.

SKY express is the fastest growing Greek airline. It has the largest domestic network and enters international flights covering a total of 48 destinations in 9 countries. It has entered into important interline agreements with global airlines such as KLM, AirFrance, Qatar Airways, Middle East Airlines, and Cyprus Airways.

SKY express belongs to the IOGR Group of companies, of the businessman Giannis Grylou, which employs a total of 5,500 employees. Most of its work is covered by the aviation sector, both in the flight part with SKY express, and the ground service in cooperation with Skyserv and Swissport SUD, with a presence at 36 airports in the country and more than 250 airlines as customers. The presence of the Group is also important in the field of Tourism, logistics, olive oil trade, etc.