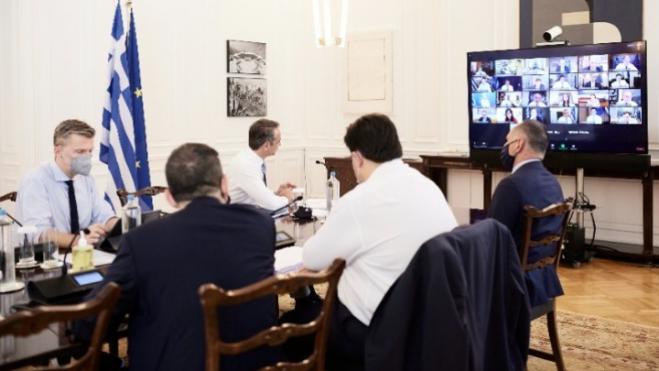 Prime Minister Kyriakos Mitsotakis outlined three "key initiatives", as he characterized them, on the agenda of the cabinet meeting held on Wednesday via teleconference.

These are: the bill for the new school, the innovative supplementary social security system and the reorganization of the Greek Police. He also noted that other important reforms are under discussion, such as the development law to further stimulate investment.
"But they are all moving in the light of the medium-term fiscal policy plan until 2025, which takes into account the fact that we have allocated 41 billion euros to support the economy during this difficult 18-month period, predicts stable growth rates - 3.6 pct for this year, 6.2 pct for next year, and around 4 pct until 2025," he stressed.
The prime minister noted that as the problems from the health crisis subside, the overal plan is forward oriented. As vaccinations progress, we have every reason to be moderately optimistic and citizens have a right to be optimistic, he underlined.