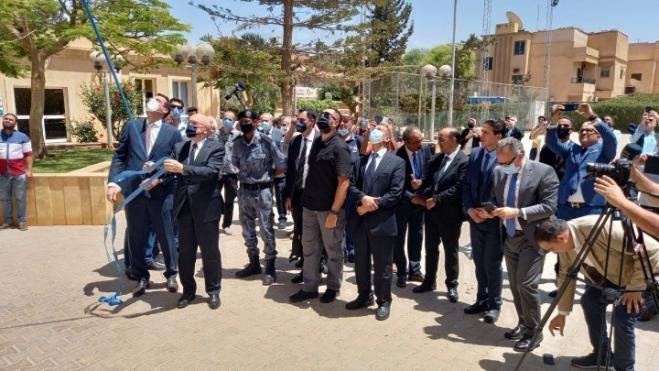 Greece inaugurated its consulate in Benghazi on Monday, in the presence of a delegation headed by Deputy Foreign Affairs Minister Kostas Fragogiannis and the local Greek community.

"We are the first country to have consular representation in Benghazi," Fragogiannis said, which along with the delegation's visit "confirm, expand and complement the diplomatic relations" of Greece and Libya.

Fragogiannis, head of the Foreign Ministry's economic diplomacy, said that "developments in the last decade may have restricted our economic relations, but in reality the Greek business presence in Libya was never interrupted. And now that the political situation in the country is stabilizing, this interest is rekindling."

Greece and Libya have collaborated widely in the past, and are mutually important countries, he added, no less so for Libya's strategic location. He said Greece supported the interim National Unity Government from the very start, and he also referred to high-level official visits between the two countries.

The contacts in Tripoli and Benghazi show that sectors of collaboration include infrastructure, energy, health and maritime transport. "There are also significant opportunities in education, culture and tourism," he added. "The operation of the consulate general proves our interest in you, in a practical way," he said, adding that "Greece has returned to Libya and is here to stay."

The Greek delegation to Libya, headed by Foreign Affairs Deputy Minister Kostas Fragogiannis, completed its two-day visit that included the inauguration of the Greek consulate in Benghazi on Monday.

Speaking to Athens-Macedonian News Agency (ANA-MPA), Smyrlis referred to contacts in Tripoli and Benghazi with the ministers of development, cooperation, foreign affairs, health and economy, as well as with business agencies and chambers of commerce. The response on the Libyan side was very cordial and "our counterparts are enthusiastic over the upgrade of our diplomatic presence in the country," he noted, and called for further visits to discuss specific projects.

"We agreed to a business delegation within the next quarter and will move to a memorandum of collaboration between Enterprise Greece and the Libyan Investment Forum," he told ANA-MPA. Greece is the country that will play a leading role in Libya's rebuilding, he asserted, adding, "Let us not forget we are a stable European regional power with a specific role in the region, a role we want to highlight," Smyrlis said.