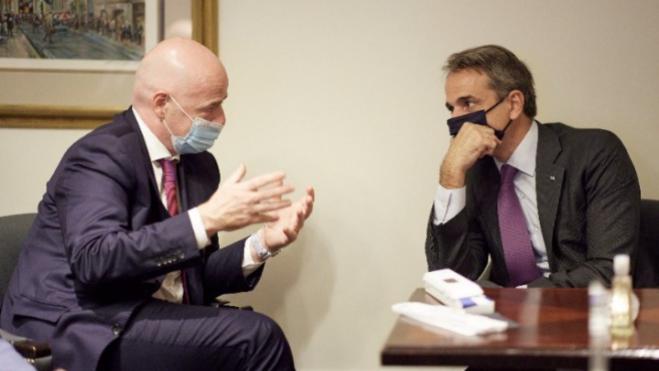 At 12:15 he will meet with the Prime Minister of Georgia, while at 13:00 with the President of AIPAC, Betsy Korn. At 20:00 local time, a reception will be held in honour of the Greek Prime Minister with the participation of expatriate organisations.

On Wednesday, Mitsotakis met with the president of FIFA, Gianni Infantino, and discussed issues of common interest as well as the developments in Greek football. Infantino presented Mitsotakis with a FIFA jersey with the number 9, as well as a set of the yellow and red cards used by referees. On his his part, Mitsotakis offered Infantino a collectible watch to mark the 200th anniversary since the 1821 Greek Revolution.

The deepening of bilateral and regional cooperation between the European Union and Africa dominated the dinner hosted in New York by the President of the European Council, Charles Michel, for the elected leaders of the EU and African countries, also on Wednesday.

Government sources pointed out the active Greek interest in Africa, while they reminded the important contribution of our country through the activation of "vaccine diplomacy", as almost one million doses against the coronavirus pandemic have already been donated to countries on the African continent, such as Kenya and Rwanda.