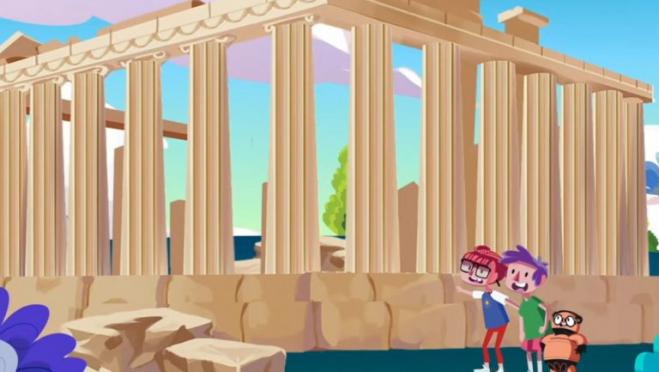 With an original production, aimed at children aged 7-15, EOT dynamically renews and enriches the country's visibility internationally, with innovative tools to reach a traveling audience of all ages from around the world. The first animated tourist video is now a fact and promotes family vacations in Greece. It is entitled "Χello welcomes children to Greece".

Its first official presentation took place on Thursday, September 23, as part of the 14th International Animasyros Animation Festival, which is being held in Syros. The presentation event of the first travel animated video was greeted by: The Minister of Culture and Sports Lina Mendoni, the general secretary of EOT Dimitris Fraggakis, the general secretary of Digital Governance and Simplification of Procedures Leonidos Christos Mayor of Syros - Ermoupolis Nikos Livadaras.

This is an original short animated film, using the 2D animation technique and theme Greece as a family vacation destination. EOT, in the context of the communication strategy for the promotion of our country internationally (2021 - 2022), collaborated with Animasyros International Animation Festival and chose animation as the most appropriate means to attract the interest of children up to 15 years old but and adults.

As stated by the Secretary General of EOT Mr. Dimitris Fraggakis: "At a time when everything is changing, we utilize innovative tools to promote Greek tourism with a special focus on special audiences. So for the first time, EOT is aimινγ at children. We welcome our little friends, creating an animated video for children aged 7 to 15, to get a little taste of Greece. The Greece of history, nature, good food, fun and joy. A spot made with the inspiration and creativity of the Animasyros team. I thank them all from the bottom of my heart for the excellent work and love they gave to this spot. So Hello Greece for young and old ".

The president of Animasyros International Animation Festival Vassilis Karamitsanis stated in this regard: "EOT's support in our action has greatly helped the development of Animasyros. As tourism and culture in our country owe and function in a complementary way, the new collaboration with EOT for the creation of the first international tourist animated film for children has been a creative challenge and a great honor for the festival ".

The main features of the film are the directness of the animations combined with the liveliness of the original characters, designed and developed by the creative team of the film. Greece is emerging as a safe travel destination for the whole family, where children will get in touch with history and culture, enjoy a variety of activities at sea, in the countryside, in the mountains and in the city and taste Greek cuisine. And of course they will want to visit it again and again! The film is available in four languages: English, French, German and Greek with the aim of being shown not only in Greece but also in Hellenes Abroad.

The protagonist of the film, Χello, inspired by a black vase, comes to life and represents a happy, friendly figure who immediately wins over the children and at the same time invites them to follow him on his journey to Greece. The children's characters of the film were designed and developed in a "cartoonish" mood, so that young viewers can identify and get excited about the experiences of young travelers in Greece. The parents are present in the film but in a discreet way, following the wonderful journey of acquaintance of their children with the country. The vivid colors that surround the representations of the monuments projected in the film and the fast movement of the image give the film rhythm and immediacy!

Our story begins with our little heroes "getting to know" their guide, HELLO in their house, in another country. Their journey begins in a boat at sea, which is a vital element of Greece. The passage through emblematic historical monuments, such as the Acropolis and the ancient theater of Epidaurus are combined with experiences such as delicious and quality food, activities in the countryside and walks in the city. And of course the movie ends on the wonderful and at the same time safe beaches of Greece, where the children together with their new friend have fun and enjoy their holidays with carefree and plenty of play.