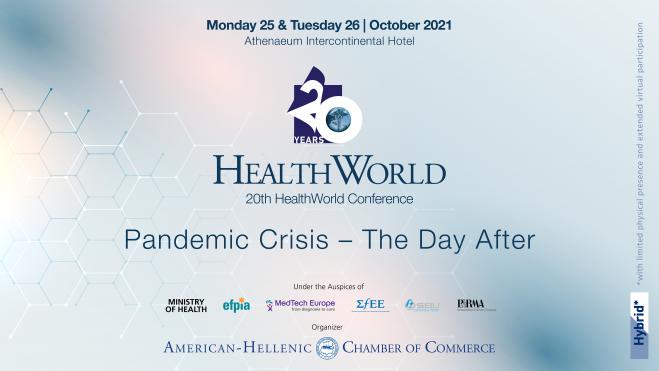 The American-Hellenic Chamber of Commerce is proud to announce its 20th Anniversary HealthWorld  to be held on October 25-26, 2021, at the Athenaeum Intercontinental Hotel in Athens, Greece.

Twenty successful years into its journey, HealthWorld is today recognized as the foremost platform for constructive dialogue between leading healthcare sector figures from Greece, Europe and the United States, senior policy makers and public officials from across the political spectrum, stakeholders from across Greece’s healthcare community, and high-level academics from Greece and abroad. Over two decades, the conference has brought together more than 7,000 delegates who have actively participated in and contributed to presentations and discussions focusing on key healthcare policy issues and their impact and importance to citizens, economies, and growth—proceedings that have led to the formulation and submission of concrete proposals to the competent administrative bodies, most of which have been promptly implemented.

In this context, the title of this year’s conference, “Pandemic Crisis – The Day After”, demarcates its area of focus, starting with the social and economic impacts of the pandemic crisis. There is no question that in addition to the severe economic impact on state budgets, the pandemic has also revealed limitations and pre-existing structural deficiencies in the health sectors of several countries, thus sparking a wider discussion on the best model to adopt for efficient and sustainable healthcare in the short and long term, which will also take advantage of continuing breakthroughs in technology.

It will be our pleasure to welcome you once again at HealthWorld, which is celebrating its 20th anniversary this year!